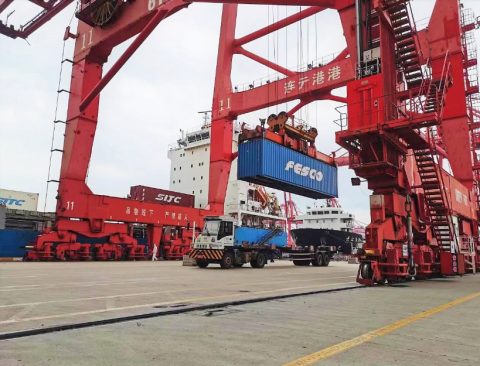 FESCO Transportation Group has launched a new intermodal service from Japan to Uzbekistan via China and Kazakhstan. It is called FESCO Trans China Railway, and links sea and rail to connect the countries.

The service includes sea shipping from the Japanese port of Yokohama to the port of Lianyungang in Jiangsu province, China. From here, the transported containers proceed by rail.

This journey takes through China to Khorgos border with Kazakhstan. At this border the containers are reloaded to the 1520 gauge network, to be delivered by rail to their place of destination: the terminal of Chukursai in Tashkent, Uzbekistan.

The service is a regular one on the timetables, and will run twice a month in one direction. The service mostly transports car parts from Japan.

The first batch of 18 forty-foot containers shipped from port Yokohama is now located at the Kazakh-Chinese logistics terminal in the city of Lianyungang. Containers are scheduled to be dispatched by rail on 30 September 30.

FESCO commented that the intermodal service will enable it to develop alternative container delivery routes via Chinese ports, as well as increase its presence in countries of Central Asia, which is one of its new strategic directions.

The Russian company recorded record volumes in the first half of 2022. It moved 144,000 TEUs on its international network, a 21 per cent increase compared to the same period of the previous year. When it comes to intermodal transportation, FESCO registered a 10 per cent increase year-on-year. This increase, according to the company, was caused by a larger fleet capacity. More specifically, 3,184 new units have been added to the container fleet as well as 1,723 new 80-foot platform wagons.