Rail freight in Kazakhstan has ‘nothing to worry about’

Riots in Kazakhstan have come to an end and the situation is stable, just as it is on the railways. Railway traffic currently runs as usual, is the message of the national railway company Kazakhstan Temir Zholy (KTZ).

Although it always claimed that there is little disruption to the flow of rail freight traffic through the country, it reconfirmed this stability on several occasions over the past few days. On Tuesday 11 January it wrote: “Railway workers provide stable transportation of passenger and freight trains. On the network of KTZ there are no trains that have been cancelled. Freight trains, including transit ones, follow the schedule, just as passenger trains.”

Kazakhstan is one of the most important transit countries on the New Silk Road. The bulk of all rail freight traffic runs via the main corridor, which leads from Poland to Belarus, Kazakhstan and Russia to China, or vica versa. Turmoil on the railway network would therefore cause serious problems to the supply chain, as other routes between Europe and China only provide additional capacity.

However, the KTZ was quick to announce that apart from some delays, there was little disruption on the route. On 6 January the company said that 129 freight trains were able to pass through with some delay that day, while an update on 8 January indicates that important industry segments are given priority. The railway company also reported that there is no damage to the rail infrastructure due to the recent riot in the country.

In its latest update, which was on Wednesday 12 January, it mentioned that the “strategically important cargo – coal – is delivered to consumers without interruption.” The transportation of socially significant cargo is under special control in KTZ, although this is more a local shipment rather than a New Silk Road consignment.

For the international community, the company can assure that safety on the railways is guaranteed. According to Norlan Bagibayev, an EU representative for KTZ, there is nothing to worry about. “Remember that Kazakhstan, as the bridge between East and West and a significant section of the Silk Road and Belt and Road project, is the serious object of interests of different worldwide economies. That is why you should not worry about your projects and investments”, he wrote on his Linkedin page on Monday.

According to rail freight readers, it is too early to tell whether there has been an impact. This week, we ran a poll on the website asking: Is the situation in Kazakhstan affecting the Eurasian corridor? The majority of the people that responded opted for the answer ‘it’s too early to tell’.

This may have something to do with the expectation that political unrest can eventually lead to hesitance to use a certain corridor, as was the case for years in Ukraine. It took time for people to gain trust in the transit route through Ukraine, even though it guaranteed safe passage for freight trains. Whether the same could apply to Kazakhstan is hard to say, because the route has been the most used route for many years, and its users may not easily divert. 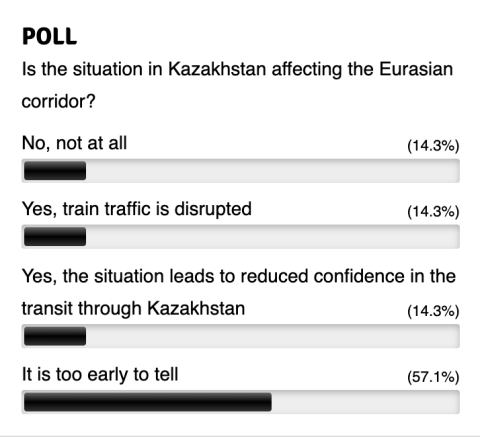