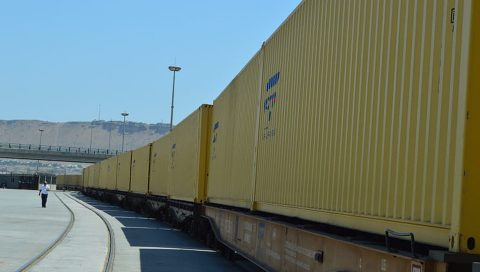 ADY Container has launched a new service between Xi’an in China and Baku in Azerbaijan. The first train commenced from China on 6 December and arrived in Azerbaijan on 29 December through the Trans-Caspian route.

ADY Container organised the train in cooperation with the trade representation of Azerbaijan’s ministry of economy in China and the Xi’an Free Trade Port Construction and Cooperation company. It is not the first train organised between the two countries via the specific route.

However, it is a new partnership that will boost volumes via the Caspian Sea. The new service will be regular in 2022 timetables, said ADY Container. Details about its frequency are not known yet, but the company from Azerbaijan mentioned that trains could also continue travelling towards Georgia and Turkey.

As mentioned, the first trip of the new service took place in December. The train carried 50 40-foot container with various types of cargo. The transit time between the two destinations was 23 days, a pretty long time considering that the train only had to cross Kazakhstan and the Caspian Sea from China.

Here is highlighted one of the main weaknesses of the Trans-Caspian route. The Middle Corridor, as the route is also known, faces most of its bottlenecks when cargo has to travel across the Caspian Sea. In this case, ADY Container indicates that cargo was stranded for several days in the port of Aktau (Kazakhstan) until it crossed the sea to reach Baku. Severe weather conditions were responsible for the delay this time. Nevertheless, it is quite usual for services to get delayed due to the lack of vessels, for instance.