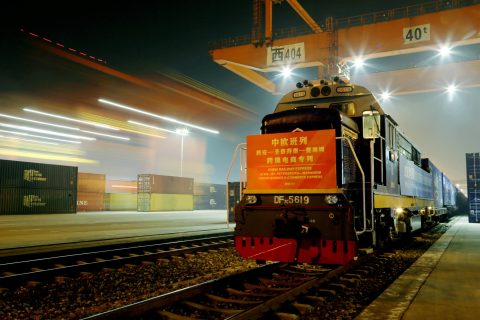 A new China-Europe connection commenced on 1 January, linking Xi’an in China with Mannheim in Germany. The direct train connection between the two destinations is unique because none of the traditional New Silk Road routes is preferred.

The new train service operated by the Xi’an platform company will transit via St. Petersburg in Russia and transport cargo to the German Mukran port. From Mukran, cargo will get reloaded on a train and travel until Mannheim. The first train is already in transit carrying 50 containers with electronics and clothes.

It follows the route via the Manzhouli/Zabaykalsk border crossing between Russia and China, covering a distance of approximately 12,800 kilometres in about 16 to 18 days, reports the Chinese news portal Sina while the news confirm Russian and Belarusian news outlets.

Xi’an platform company choosing transit via Russia and St. Petersburg did not come out of the blue. On the contrary, this is a very well calculated decision. First of all, the route via Russia is faster because trains switch between different gauges only once. After that, the only transhipment takes place in St. Petersburg and Mukran ports.

Moreover, skipping transit via Belarus and Poland saves Xi’an platform company from more delays resulting from congestion on border crossings. Małaszewicze is already extremely busy since it absorbs almost 90 per cent of China-Europe traffic. On top of that, some closures that took place in the last months of 2021 due to repair works have increased the backlog of trains to several weeks.

Last but not least comes the political aspect behind this decision. The tension between Poland and Belarus resulting from an immigrant crisis has led to increased instability in the relations of the two. Threats were launched from both sides concerning potential border closures leaving the industry with a feeling of uncertainty regarding the continuation of train services in such a scenario. Maybe choosing St. Petersburg constitutes a clear statement from China that countries should not project their rivalries on the BRI and endanger the supply chain, or they should face the consequences.

The Russian port has been gaining much attention lately. Before this service, FELB also turned its focus towards St. Petersburg in December when it launched a service between the city and Beijing in China. The service also has a multimodal profile since it links north European ports like Rotterdam, Duisburg or Hamburg with St. Petersburg before putting cargo on rail on the way to China.

“It is a relief and alternative to the route via Poland and Belarus”, said FELB back in December. “Recently, there have been repeated difficulties on the European part of the route from Central Europe to China. In particular, the political situation in Belarus and long tailbacks at the Polish border made transport difficult”, added the company.

It appears that St. Petersburg is gaining from the momentum and proves to be a viable and efficient New Silk Road alternative with the potential to become a primary route as well. The increased preference of companies to use it as a gateway and the reasons behind their decision are a strong message that the Poland-Belarus route might prove unviable in the future. Simultaneously, though, they are a positive indication that the New Silk Road will find the needed alternatives to keep going.