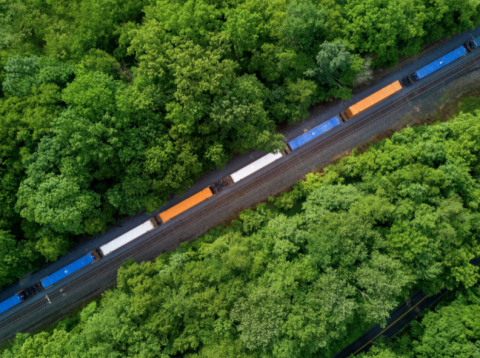 FELB launched a new service between St. Petersburg in Russia and Beijing in China. However, the service is multimodal, linking north European ports like Rotterdam, Duisburg or Hamburg with St. Petersburg before putting cargo on rail on the way to China. “It is a relief and alternative to the route via Poland and Belarus”, said FELB.

The service’s pilot train already arrived in Beijing on Saturday 11 December. Cargo began its trip from Hamburg on 16 November, while the train from St. Petersburg commenced carrying 45 containers on 25 November. From January, the multimodal service will be launched on a regular and stable basis, while trains will also use the route via Kazakhstan to reach China.

Need to bypass Poland and Belarus

FELB’s new multimodal service truly brings northern European hubs closer to China. It starts with transporting goods from Rotterdam, Duisburg, Hamburg or Gdansk/Gdynia to St. Petersburg by short-sea routes. The reason behind this choice is the attempt to skip passing through Poland and Belarus, which are amidst a border crisis fueled by political rivalry.

“Recently, there have been repeated difficulties on the European part of the route from Central Europe to China. In particular, the political situation in Belarus and long tailbacks at the Polish border made transport difficult”, said FELB. As a result, the company chose the route via St. Petersburg, which appears to be more efficient at this moment.

In fact, as the Eurasian company explained, it also has some benefits since it includes only one train rerouting on the Zabaikalsk terminal on the Russia-China border. The traditional route via Poland and Belarus included two train rerouting.

The strong cooperation with Russian Railways and the affiliation with RZD BA (Russian Railways Business Asset)gives FELB several benefits to control and optimise the route via Russia according to its needs. The company’s knowledge of the Russian market enables the service to have limited border controls, efficient customs clearance and ensure flexible products while strengthening its position on the Eurasian market.

“The new service will noticeably strengthen the trade of goods with China, as we are now able to offer our customers a stable solution with manageable transit times, where we have everything in our own hands,” highlighted Uwe Leuschner, CEO of the FELB. “With the route via St. Petersburg, we are demonstrating a real alternative that belongs to the future in view of increasing volumes of goods,” he concluded.