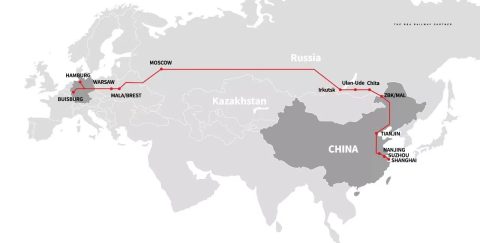 No subsidies but surviving: ‘it is a matter of right timing’

There are not many private railway companies setting up railway services between Europe and China, but Toprail is doing exactly that. “If you incur losses, they are your own, but our role is very important” says Bria Liu, who founded the Chinese railway logistics company. The company’s strength: eastbound services, not to inland terminals but to the east of China. What is driving this firm to go off the beaten path, and still be successful?

The most important service the railway firm currently offers is definitely the weekly eastbound line, via Manzhouli to Nanjing and Suzhou, Liu says. “Once per week on a regular basis, and with a shuttle service from Nanjing to Shanghai since October. The eastbound Nanjing train is the very first weekly regular product to the eastern region of China.”

And with that, the contours of the companies’ image have been drawn. Because it is eastbound services that it wants to develop, especially to the east of China. “Toprail already runs a lot of eastbound trains, for example via FELB and Sinotrans to Shenyang, via YXO into Chongqing, and via YTO to Yiwu. Altogether we have roughly 100FEU per week, however, in the whole Shanghai and Jiangsu region, there was no weekly eastbound service.”

If you ask Liu, it is especially this region that is attractive for rail freight services. While popular inland terminals like Xi’an and Chongqing are depending on subsidies for its eastbound trains, the rates to the east coast are attractive already. “There is good infrastructure for rail freight. The distances between terminals and factories are shorter, there are more last-mile trucking services available, as well as customs broker resources”, she sums up.

Just as the company favours the east coast, it is preferring the eastbound service in general. The imbalance between east- and westbound traffic still dominates the market today; there are far more westbound services than trains from Europe to China. Liu likes to see this as an advantage. “Procedures are faster at the border, especially on the route via Manzhouli, which is less consumed than the route via Kazakhstan. There is less traffic, so the efficiency at the Manzhouli border is better.”

At the same time, eastbound services are needed to return empty containers to China, she continues. “There is a huge shortage of containers for westbound trains in China. Bringing these empty containers back, directly to the Shanghai region, means a lot of savings in time and cost.”

Role of the private company

According to Liu, the role of a private company is especially important in this. “As you might know, all well-known eastbound trains are supported by state-owned companies. As such, they are subsidised, and hence they do not incur the losses. There is rarely any private company taking the lead, as this means the risk of facing the losses.

“We see our role as being needed. State-owned companies only exist because of these subsidies. When they face losses, they face difficulties in passing the audits. As a private company, we are allowed to build up our eastbound service under the agreement that we leverage the loss ourselves. We see a strong demand here. Yes, it will take time till we can make ends meet, it might take one or two years, but eventually we will survive. And yes, we may fail too, but business is about taking risks, but we are fighting for a certain future. More or less, we are able to keep the container’s circulation going.”

How can eastbound traffic be profitable?

Of course, it is not just for charity that the company is putting its focus on eastbound services. The margins may be low, but there are ways to profit. “The trick is attracting a variety of clients while waiting for the right timing, when other platforms are relying less on subsidies. When the whole market is back or closer to a normal cost range, we meet our goals by bringing empties back and providing efficient services in both directions” says Liu.

“In the past year, a lot of westbound trains were already charging more than the cost of rail freight, which shows a signal that eastbound services could survive, as we can earn more margins on westbound trains. These days the rates are dropping, starting this October due to electricity restrictions of manufacturers, and westbound rates gradually return to a normal cost range.”

For now, the company will put all eyes on the Import Expo China, the annual logistics event held in Shanghai. The team of Toprail will be there to exhibit, and show visitors the many benefits of rail freight to and from eastern China.

“We will inform people that there is a solution directly to east China without other intermediary cities. We definitely need more exposure because the market demands a variety of options. And for us it is an opportunity to see what is the impression from the market. Exchange is always great.”