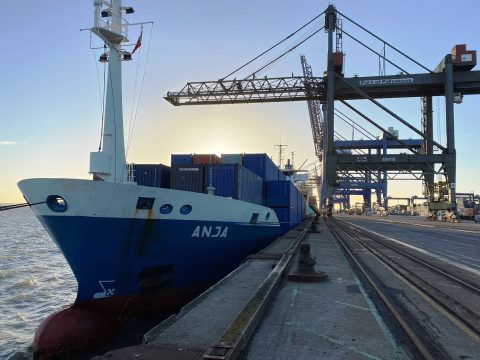 Since the UK left the European Union, the China-UK route has found solid ground in Kaliningrad as a transhipment point. After the port of Immingham, vessels now take off to the port of Felistowe from the Russian enclave. Soon, Tilbury will be added to the timetables. What is making this route so popular?

After leaving the railway terminal in Chengdu on 25 April, a first container train was routed via the border crossing Khorgos – Altynkol to Kaliningrad, where it arrived eleven days later, on 6 May. Here, containers were transshipped from rail to RTSB’s dedicated vessel Anja. Four days later, the vessel berthed at the Hutchison Port in Felixstowe, Britain’s largest container port. It was the first trial journey of this kind, completed in a record total transit time of 14,8 days, said RTSB.

“This multimodal service not only eases customs procedures for shipments from China by bypassing the European economic area, thus avoiding additional declaration and controls in Europe. It also proves to be faster than other transport options between China and the UK. Intermodal rail connections generally offer lead times between 18 and 22 days”, Elena Schmitz von Hülst, marketing director at RTSB explained.

Intermodal transport from China to the UK was traditionally routed through France, following the Channel Tunnel, or via the port of Rotterdam, with a short-sea link completing the journey. But since Brexit, the option of Kaliningrad has proven to be a popular solution, Schmitz von Hülst observes.

Part of the success, according to Schmitz von Hülst is that the vessel is dedicated to service the rail service, not the other way around. “Our advantage is the efficiency; we are able to assure short transit times by dedicating vessels to our train schedules. There are no fixed departure days; the vessels are exclusively allocated to our multimodal services between China and Europe and scheduled according to train arrivals.”

This also means that there are two separate shipping services between Kaliningrad and the UK: one servicing Immingham for trains from Xian, the other servicing Felixstowe for trains arriving from Chengdu. In total, RTSB currently operates three vessels, departing 6-8 times a month from Kaliningrad to the UK.

And this is not all. In August this year, RTSB will establish a third line, to the port of Tilbury, which is located on the Lower Thames about 50 km from London. The service to Felixstowe is now in a starting phase. This means that it departs twice a month, until it is more established in the market. Then, it will be offered as a weekly service.

“Our Immingham service is already on a weekly schedule”, says Schmidt von Hülst. Moreover, this route was recently lauched as an eastbound service as well. “We are convinced, this new combined transport will create added value for our customers and the entire logistics market by drawing clients, seeking efficient and reliable shipping options”, RTSB explained.

Although Kaliningrad is new to the China-UK route, UK has been growing in popularity on the New Silk Road for a while. As early as November 2018, the British operator Davis Turner began to operate its China-UK train service, and has achieved stable weekly operations. At first, the starting point of this service was Wuhan, but due to the impact of the epidemic, the starting point was temporarily changed to Xi’an.

Different from the new sea-rail link, the existing China-UK line consists of three sections: railway, road and sea. Specifically, after the China-Europe Express train arrives at Duisburg, Germany, the cargo is reloaded on trucks for the distance to the Port of Rotterdam in the Netherlands. This is followed by a ferry service to the UK port.

It is also not the first time the port of Imminghad is linked to China. Since the beginning of June 2020, DB Cargo Eurasia offers a weekly service from Immingham to Hefei in China, via the German port of Cuxhaven. The service, which runs both ways, includes a shipping line between Immingham and Cuxhaven and further on to Hamburg. Here, goods are transloaded on the train.