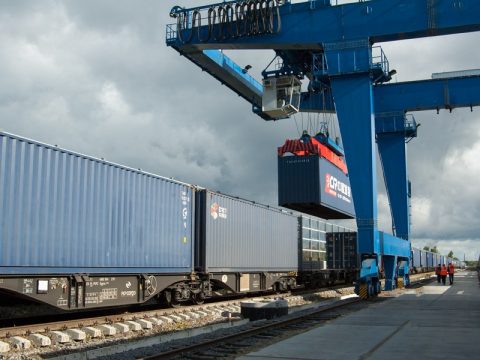 New UK-China service, this time via port of Kaliningrad

Published on 13-04-2021 at 12:27
Transhipment of containers at the intermodal terminal in Kaliningrad Region, source: Russian Railways (RZD)

A new sea-rail combined transport line has been opened between Xi’an and the UK port of Immingham. The rail leg covers the westbound journey up till Kaliningrad, where the cargo continues by vessel to the UK. The service was launched at the end of March.

The service is operated by Russian Railways RZD in cooperation with the JSC UTLC Eurasian Rail Alliance. The goods transported are auto parts, industrial equipment parts, medical equipment and other commodities. UTLC ERA called the multimodal service an effective alternatice to overland routes.

This is not the first connection between Xi’an and the UK. As early as November 2018, the British operator Davis Turner began to operate its China-UK train service, and has achieved stable weekly operations. At first, the starting point of this service was Wuhan, but due to the impact of the epidemic, the starting point was temporarily changed to Xi’an.

Different from the new sea-rail link, the existing China-UK line consists of three sections: railway, road and sea. Specifically, after the China-Europe Express train arrives at Duisburg, Germany, the cargo is reloaded on trucks for the distance to the Port of Rotterdam in the Netherlands. This is followed by a ferry service to the UK port.

It is also not the first time the port of Imminghad is linked to China. Since the beginning of June 2020, DB Cargo Eurasia offers a weekly service from Immingham to Hefei in China, via the German port of Cuxhaven. The service, which runs both ways, includes a shipping line between Immingham and Cuxhaven and further on to Hamburg. Here, goods are transloaded on the train.

The real newcomer here is the short sea leg Kaliningrad-Immingham, in combination with the China-UK link. In recent years, alternative routes through the Russian enclave Kaliningrad have become more and more popular in the market, and the increase in transshipment volumes is obvious to all. From January to February this year, the volume of freight between China and Europe via Kaliningrad was 12,600 TEUs. Noteworthy is that the annual freight volume of this region in 2018 was only 9,970 TEUs.

Compared with traditional routes, the Kaliningrad line is quite competitive in terms of capacity and transit time. The two main railway stations in the area can handle a total of 750,000 TEUs of cargo each year, and according to the current volume development, the handling capacity is more than sufficient.

More importantly, it only takes around 10 hours for goods to transit through Kaliningrad, and the time limit for customs clearance has dropped to about 2.5 hours in recent years. In the congested Malaszewicze, the waiting time may be a few days.