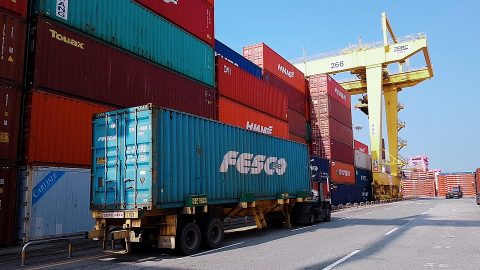 Russian companies RZD Logistics and FESCO have tested a new multimodal route to the Republic of Korea. It combines three modes of transportation: shipping, railway and lorry. The new route connects the country with the European Union via the Trans-Siberian railway.

The test container departed from the South Korean port of Pusan on 25 June. FESCO delivered it to the Commercial Port of Vladivostok (also a part of FESCO Group). The Russian company used its own shipping line FESCO Korea Express (FKXP) that connects Pusan and Vladivostok.

Another participant, RZD Logistics, organised the delivery of the container to the Brest railway station in Belarus. At this border station, the freight was transshipped to the rolling stock running on the 1,435-millimetre gauge and then transported by rail to the Brzeg Dolny railway station, located 30 kilometres northwest from Wrocław.

The Polish section of the route was arranged by PCC Intermodal, FESCO’s official partner and only agent in Europe. The final delivery was provided by lorry, from Brzeg-Dolny railway station to the customer’s warehouse in Wrocław.

Text continues below the map. 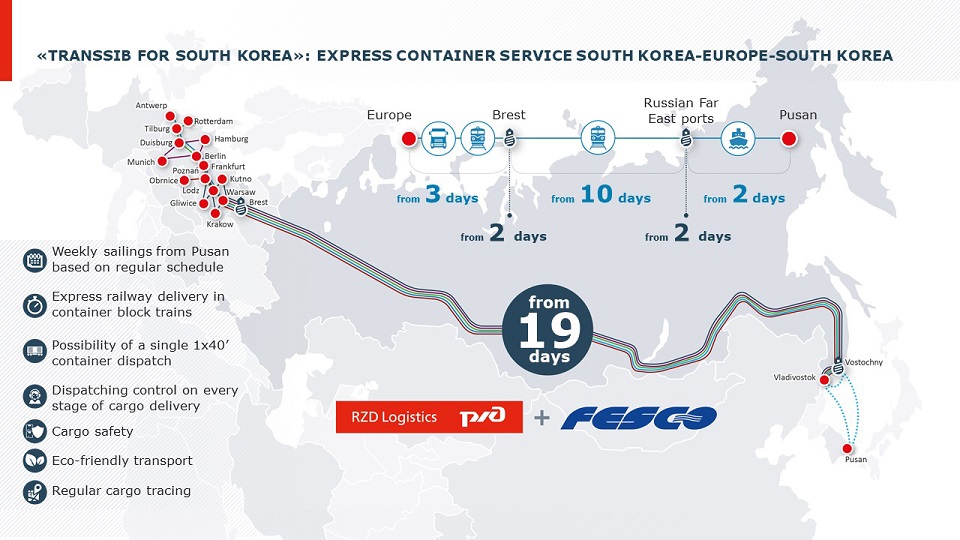 The entire transit time was 21 days, which is two times faster than by maritime route via the Suez Canal. RZD Logistics said that the delivery time could be reduced to 19 days. “A test delivery from Japan to Europe by Trans-Siberian LandBridge demonstrated the viability of the route through the Commercial Port of Vladivostok and the Trans-Siberian railway.

“The customers made sure of its safety and quality and saw the rail delivery is faster than deep-sea transportation. Now we offer to our clients from the Republic of Korea to assess economical efficiency of the transit service”, CEO of RZD Logistics Vyacheslav Valentik said.

The multimodal route between South Korea and Europe is the second one being tested in recent months. At the end of May RZD Logistics and FESCO tried a container delivery from Japan to Poland via a similar multimodal service.

FESCO supplied the container from the Japanese port of Yokohama to Vladivostok by sea, then it was transported to Wrocław, Poland, by rail. The test delivery was provided in 19 days. The maritime route via the Suez Canal usually takes 45 days. RZD Logistics and FESCO consider that the new service has a lot of potential and intend to make it the regular. The freight traffic between Japan and Europe amounts to 3 million TEUs per year.

Do you want to know more about the New Silk Road and the connection to Japan? On 26 and 27 November the European Silk Road Summit takes place in Venlo, the Netherlands. Representing PCC, Dariusz Stefańsk will present the new intermodal connection between Europe, Japan and Korea.

At this two-day international event more than 35 speakers and around 250 delegates will share their experiences, expertise and latest news. Registration for the event is now open. The programme and speakers can be found on the website.