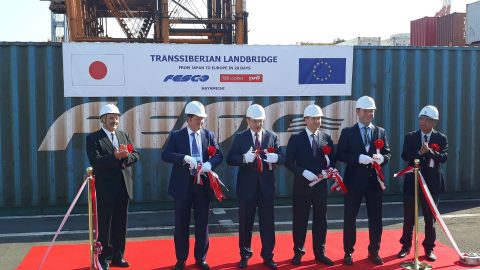 A new multimodal service over the Trans-Siberian Landbridge has been launched, connecting Yokohama in Japan to Wroclaw in Poland. It is the first time this railway route is used to connect Japan and Europe. The service is organised by RZD Logistics JSC and FESCO Transport Group (FESCO). The first shipment departed on 23 May in the presence of the First Deputy General Director of Russian Railways JSC, Alexander Misharin.

The multimodal service includes a sea leg from the Port of Yokohama to Vladivostok Commercial Sea Port in Russia. There, it hits the tracks of the Trans-Siberian Railway. The total delivery time is around 19 days, while the alternative sea route through the Suez Canal takes 45 days. The arrival of the test container, which was shipped with non-hazardous products of the chemical industry is expected to arrive in Poland in mid-June.

As part of the joint transit product, FESCO provides the sea delivery, port handling and provision of the container fleet, while RZD Logistics is responsible for the organisation of rail transportation. The partners aim to make the service available to customers in June 2019. The next step is the organisation of a return journey to Japan.

“With this project we want to demonstrate our potential for cooperation with Japanese business in practice via offering modern competitive transport products. Together with the Ministry of Transport of Japan, we agreed to develop multimodal transportation through the Far Eastern ports of Russia and Trans-Siberian Railway”, said Alexander Misharin, First Deputy General Director of Russian Railways JSC.

Misharin explained that Russian Railways has invested more than 5 billion US dollars (more than 5.6 billion Euros) over the last five years, developing railways in the east of Russia. Transportation via the Trans-Siberian route has grown by more than one-third over this time. “We see a lot of potential for cooperation with our Japanese colleagues and would like to use the created infrastructure”, he added.

“Our work experience in international transport corridors with India, China, Vietnam and Korea shows that increasing of the delivery speed and building organized multimodal chains is exactly what a modern shipper needs. The synergy of requests from Japanese and European businesses with the combined capabilities of our three companies led to the creation of the Trans-Siberian Landbridge product and is the key to its successful development”, was mentioned by Vyacheslav Valentik, General Director of RZD Logistics.

Today, almost all freight traffic between Japan and Europe is shipped over sea via the Suez Canal. This is because the procedures for land transportation are complicated and information scarce. However, in August last year the Japanese and Russian governments announced the intention to develop a regular railway route and thus pave the way for resolving territorial disputes. Russian Railways and the Ministry of transport of Japan committed to increasing the volumes of Japanese goods’ multimodal shipments across the ports of Russia’s Far East and Trans-Siberian railway.

The freight traffic between Japan and Europe amounts to 3 million TEU per year, according to Alexander Isurin, FESCO President. “We have the possibility, together with colleagues from Russian Railways, to offer our customers a much faster and more efficient service on Trans-Siberian Railway”, he added. The Trans-Siberian Railway connects Moscow and Vladivostok, in the east of Russia. From Moscow, there are several possible connections to Europe.