Japan and Russia plan to officially launch a freight transport route between the two countries via the Trans-Siberian Railway. A test ride will be carried this month. Five to ten companies are known to participate in the test.

The Trans-Siberian Railway connects Moscow and Vladivostok, in the east of Russia, where freight can be continued by sea to Japan. It is also the most northern route of the so-called Eurasian railway network, transiting only though Russia on its way to the Far East. The plans were announced in The Japan News. The two governments aim to foster mutual economic cooperation and build confidence between the two countries and thus pave the way for resolving territorial disputes. Current freight transport between the countries is mostly via sea and air routes, as the procedures are complicated and information scarce.

According to the media website, the participating companies are mainly Japanese distribution firms. They will study factors such as the cost and time of transportation, administrative procedures needed for customs, and import and export processes. Elements that could affect cargo, such as vibration during transport and differences in temperature, will also be examined.

The government has committed to working with the private sector in resolving possible problems involving the route. The journey is expected to take between 20-27 days, about half the time of the sea route. The costs could be reduced by up to 40 per cent, officials were cited.

The Trans-Siberian Railway was built between 1891 and 1916. With 9,300 kilometre, it is the longest railway in the world. The infrastructure is considered to be highly reliable, according to research institute Roland Berger. Currently, the route is mainly used by North Korean and Chinese companies trading with the west. 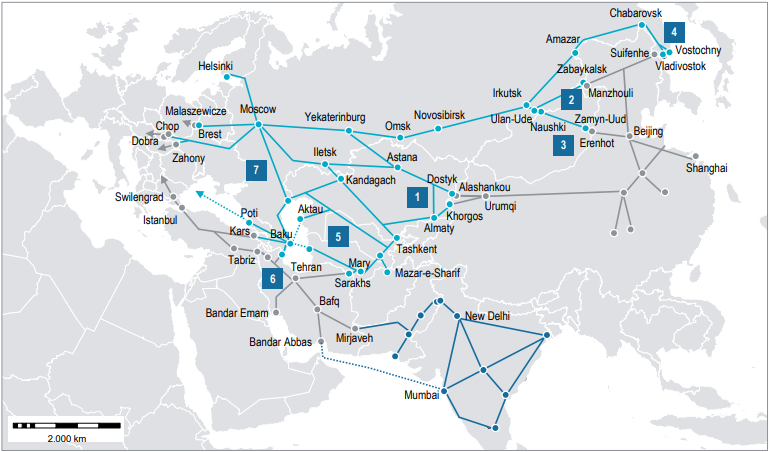 There are two sub-branches diverting into China via Inner Mongolia; one via the border of Manzhouli-Zabaykalsk and another via the border of Erenhot-Zamyn. Especially the first route is highly popular for freight transport to and from China. The second one requires infrastructure upgrades to improve capacity.

Since the fall of the Soviet Union, Japan’s reliance on rail transport slowed down and other modalities became more dominant. In May this year, global logistics company Nippon Express announced a new freight service connecting Japan to the Eurasian railway network via China under the banner ‘Eurasia Train Direct (Sea & Rail)’.

One route connects the Japanese ports of Tokyo, Yokohama, Nagoya, Osaka, Kobe to Dalian in China by sea. From there, cargo is transported to Germany via the Manzhouli-Zabaykalsk border. Another service utilises air transport, departing from the Japanese airports of Narita, Haneda, Chubu and Kansai. The flight takes cargo to Chongqing, China, where it will hit the rails to Duisberg via Kazakhstan.