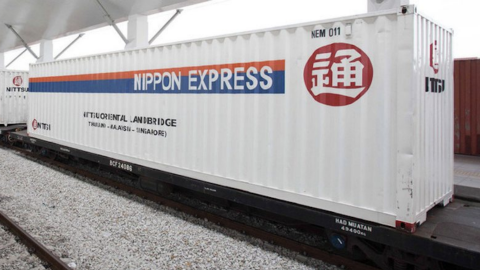 The Japanese freight forwarder Nippon Express wants to start a regular rail service between Chinese and European cities in February next year. In doing so, it wants to charter complete train combinations of Chinese rail operators.

This was reported by the business magazine Nikkei Asian Review. The publication lists the cities of Wuhan, Chongqing, Xian and Duisburg as possible destinations. The transport time of twelve to fourteen days for forty days in container shipping would ultimately have led the Japanese freight forwarder to bet on an intercontinental rail freight service.

The first shuttle will take off after the Chinese new year of 2019. The frequency will initially be one to two services per month. Nippon Express wants to gradually increase this number to a weekly rail service, depending on the demand.

Nippon Express previously bought space on existing freight trains between the EU and China, but now wants to charter own train combinations. According to the report, it may work together with a number of Chinese logistics service providers and the state railways of Kazakhstan.

Nippon wants to transport Chinese car parts, LCD screens and machines to Europe with its own rail service. Wine and baby powder would be part of the return cargo. The Nippon Express initiative is also associated with the price war between China and the US. Nippon expects that fewer Chinese goods will be bought by North America, providing a market shift to the EU.