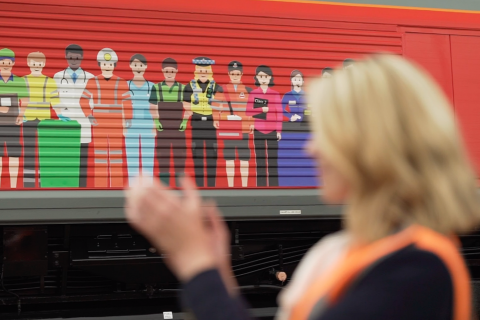 Since March the rail freight industry in the UK has been among the most appreciative of the key workers who have kept the country running during the lockdown and restrictions that have been imposed to combat the pandemic. Workers in the industry itself are due a round of applause for the efforts they have put in to keep vital supplies moving around the UK. With a second wave feared this winter, the industry is preparing to step up again and keep supplies moving. That’s the subject of a special report in the upcoming edition of RailFreight Live (Friday, 16 October).

Named locomotives and widespread participation in the national ‘clap for carers’ weekly applause have been the most visible tokens of appreciation from around the rail freight community. However, the real benefit to the community has been the extra effort and amended working practices to make sure that, on the rails at least, it has been as close as possible to business as normal.

Industrial bulks down, intermodal boxes up

Speaking in an exclusive report for Friday’s RailFreight Live, Steve Turner, a regional manager for GB Railfreight, agreed that it had been a challenging year, but the rail freight community had stepped up and been counted. “Everybody has been having trouble through the pandemic, and businesses have contracted. Us, in the rail freight industry, have seen the construction industry contract, but that’s been balanced by imports and containers.”

While bulks and industrial cargo declined sharply in the early months of 2020, there has been a significant recovery. Domestic intermodal traffic has been a key sector, where rail freight responded to increased demand, and to a large extent kept the country fed and supplied. Official figures, from the Office of Rail and Road, will be released in early December which will cover the first full quarter of the pandemic. However, the situation still continues to develop.

The UK has this week introduced revised measures to deal with the spread of coronavirus. The details vary between the four nations, but broadly follow a system of three levels of risk control. The most radical measure is the unprecedented move by the devolved government in Wales, which is introducing a closure of the border, to deny entry to the country by anyone coming from areas of the UK designated as at highest risk of infection.

How this may affect domestic trade is not yet clear, but with significant bulk flows, particularly fuel oils from South Wales, timber to factories in North Wales, and intermodal traffic, it is obvious that rail freight will be vital to keeping the Welsh economy running. Welsh ports also play an important role in UK trade with Ireland and the Atlantic coast of Europe. Implications to operations there will be observed in the coming weeks.

Freightliner’s ‘Over the Rainbow’ locomotive has been a familiar sight on the UK network, but like other operators in the sector, the company has been working behind the scenes to adapt to circumstances in the long term. “We have sought to improve our efficiency and productivity”, says Jon Bunyan, quoted in an exclusive feature for RailFreight Live. “For example, we have been running two 775 metre container train circuits out of Southampton to Manchester and Leeds, where these trains would usually operate at 640 metres. We are also working closely with Network Rail to run other 775 metre trains.”

While being among those to have stood up and applauded the tireless efforts of key workers, production manager Eddie Hoy of DB Cargo says that workers in the rail freight sector deserve a hand too. Across the industry there has been unstinting effort. “The hats go off to the staff who have been in day in and day out, and carried out their duties to help deliver all over the country, It’s been amazing now, the change we are delivering”, he said.

The full report features in today’s (Friday 16 October) edition of RailFreight Live, presented from ProMedia Studios in Rotterdam, and covering the entire European scene. With a busy week in the sector, and this week’s Track Access Charges Summit, there is plenty to discuss. RailFreight Live is broadcast online, on Fridays, at 12pm London, 1pm Rotterdam. Link directly from the RailFreight.com homepage.