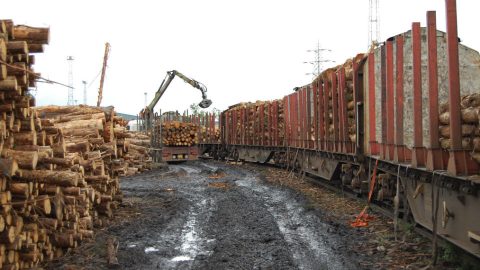 There are fresh calls for a more sustainable approach to the timber industry, and a new look at bringing back rail as the prime mover. However, even supporters say there are considerable commercial challenges.

Timber trains could once again ­operate north of the Border, but perhaps not to anything like the extent once seen across the industry. That is the considered observation from David Spaven, the Edinburgh-based Scottish representative of the Rail Freight Group, and a long-term advocate of moving the timber industry’s long-distance logistics back from road to rail where possible.

As a centre for the industry, Scotland’s commercial plantations, many established in the early 1920s to replenish stocks after the Great War, are producing around 10 million tonnes of raw timber every year. That is a figure likely to be maintained for the foreseeable future. David Spaven says that a network of around 18 railheads, almost all abandoned over the past twenty years, have in some cases the potential to be reactivated. Indeed some rail operators have been quietly considering opportunities in the more remote parts of Scotland, notably the West Highlands, where the Rannoch area is a significant producer, but poorly served by road infrastructure.

Writing in The Scotsman newspaper, he says that the pressure of 44 tonne trucks on rural roads and communities has grown since the late 1990s. “Underpinned by the wagonload train service ­network operated by the newly-privatised freight railway, a wide range of ­timber flows was transported by rail from Scottish forests, to board, paper and saw mills in Scotland, ­England and Wales.” That traffic has now almost entirely reverted to road.

Project Officer Roland Stiven says that while there are grants available, their commercial benefit remains marginal. “Scottish Forestry administers the Strategic Timber Transport Scheme which can include rail, but there has been no rail-based project funded since 2009.”

Spaven puts that down to the dismantling of the wagon-load freight network, and notes that the only remaining railhead for Scottish timber is actually in England. “The continuing success of the Carlisle rail facility has been attributed to five factors,” he says in his newspaper article. “A simple supply chain; dedicated contract rail service for one buyer to one ­rail-served mill; reliable access to a choice of timber suppliers and road hauliers; lease of long rail sidings to handle full trainloads; and good quality rolling stock and convenient repair facilities.”

Rail development lobbyists north of Carlisle promote timber transport as part of their business case. The Campaign for Borders Rail says lineside facilities would be viable for extraction from Kielder Forest, one of the biggest man-made woodlands in Europe. Stiven says lineside loading could work in some cases. “There are clear opportunities for rail,” he says. “Redundant or repurposed facilities in the west and the far north are being actively considered.”

David Spaven presents further possibilities, from as far north as Inverness and all the way south to Stranraer, on lines with relatively low traffic volumes. “By collaborating on innovation and investment, the forest and rail industries and the Scottish Government can help to transform the role of our rural railways”, he says, citing examples in New Zealand, Norway and Sweden. “Tourists and timber are a winning traffic combination on Highland-type rail routes.”

With Britain using all the timber it produces, and importing twice as much, there is no likelihood of any let up in demand. Rail’s future in the industry may well be in moving finished product northwards from the ports, but there is renewed impetus in moving raw materials southwards too, by rail from Scotland.