It’s back to the future for DB Cargo UK. The UK operator has signed a deal with a specialist charter operator to support their programme for the next three years. The deal with the A1 Steam Locomotive Trust will see special trains run on the main line, including regular crossings of the iconic Forth Bridge in Scotland.

It is not the usual sort of contract celebrated by DB Cargo, No new intermodal flows nor tons of aggregates moved. This contract will see a special locomotive and train representing the past, touring the railways of Great Britain for at least three years into the future. It represents a significant step forward for the charter industry, which has been strained by multiple pressures.

The A1 Steam Locomotive Trust and DB Cargo UK have announced a three year agreement to operate steam hauled charter trains in the Great Britain. Commencing in 2023, for three-years with extension clauses, the agreement will see DB Cargo UK operate ‘The Aberdonian’ charter services to Aberdeen from Edinburgh and Glasgow, crossing the Forth Bridge and Tay Bridge along the way.

These trains will use new build A1 class steam locomotive 60163 Tornado – a faithful replica of a historic design. The agreement also allows for other charter train operations between the partners across the network from Cornwall to the north of Scotland. Among other duties, DB Cargo will provide experienced staff and likely provide back up traction for all services – either to power the electric systems in the coach stock, or as a reserve locomotive for operational purposes. DB Cargo UK is one of only two companies still able to operate steam locomotives on the country’s mainlines.

Reports of the demise of steam traction on the UK network seem to have been premature. Then again, the obituary was written in 1968, when the last scheduled passenger train ran behind a steam locomotive. Since then, hundreds of locomotives have been privately restored, and form the backbone of the unique UK steam heritage railway industry.

In the rush to decommission the British Railways steam traction fleet, some historic marques were lost entirely, including the iconic A1 class, the one-time main stay of prestige expresses between London and Edinburgh. That was an oversight put right in 2008 by the A1 Steam Locomotive Trust, who undertook the huge task of building a new example from scratch.

That brand new main line steam locomotive, Tornado, ironically spent some time as the newest locomotive on the British network. It has proved a huge success for the Trust, who have employed it to haul charter trains up and down the country. The agreement with DB Cargo supports their mainline operations, and will help with expansion.

The Trust is working on another new-build, an example of the powerful P2 class locomotive, originally designed for express passenger services between London and Aberdeen. The new locomotive, designated 2007 Prince of Wales, will also be covered in the agreement, which covers the initial testing and commissioning of this new steam locomotive.

“We are pleased to reach agreement with DB Cargo UK to operate ‘The Aberdonian’ trains for the next three years”, said Steve Davies, the Trust chair. “This agreement protects our core operation, whilst also allowing flexibility with other routes and operators. It also recognises the key activity that will follow completion of P2, Prince of Wales, in around two years’ time.”

For the future DB Cargo is going back to the past. “We are pleased to continue our relationship with A1SLT and will be undertaking significant training to ensure the success of this agreement”, said Richard Corser, DB Cargo UK Account Manager Special Trains. “We successfully helped test and commission Tornado in 2008 and look forward to undertaking the same tasks for new build steam locomotive Prince of Wales.”

Key image: Tornado blowing on the Forth Bridge by Mark Sweeny and A1 Locomotive Trust 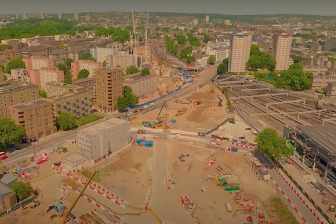 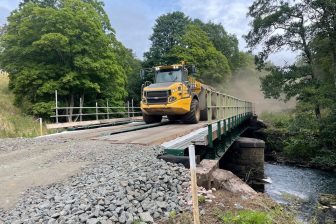