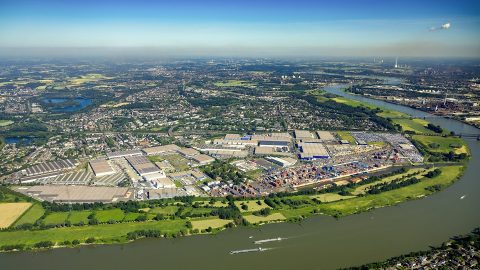 Rethinking the New Silk Road: should we still go to Duisburg?

For many years, Germany has hosted the main European hubs on the New Silk Road. But it is time to rethink the western part of the Eurasian corridor, say industry experts, as the German network is not at its full capacity this decade. It is time for a redesign of the New Silk Road.

This was a conclusion shared by webinar participants last Friday. In the webinar Poland, a New Reality, the role of Poland on the New Silk Road was at the heart of the discussion, and it was this same Poland that was suggested as a suitable consolidation place for further distribution of cargo to western Europe.

Poland has always been an important transit country on the New Silk Road. The main route runs through Belarus to Poland, before it continues to many destinations in Europe. In that sense, speaking of Poland as a consolidation hub is not revolutionary.

However, the problem lies on the western border, the border with Germany. The border crossing at Frankfurt Oder/Rzepin was always congested, but the German network is currently experiencing severe disruptions due to an intensive modernisation drive. Construction works, and the consequent diversions and restrictions are likely to affect the railways for the next ten years.

“Making Poland as the hub on the New Silk Road could be the key to success for the future, because there are already many railway lines available and not fully used”, said David Aloia, director of Silk Road at Hupac. “Apart of Germany which is right now very congested, trains connect to many other places. This is the right moment for that”, he added.

“Should you still go to Duisburg? This is a very relevant question indeed”, said Onno de Jong, transport consultant at Ecorys. Whereas we tend to look at the ‘blue banana’ as the area with the most economic activity, this is also the region near the Rhine. With the low-water levels and talk of a massive shift to rail for energy supplies, this is where you do not want to be with your train right now, he argued.

Where to if not Germany?

Where do we want to be? There are many routes that lead to Europe, the route through Germany is certainly not the only one. Over the years, there have been plenty of cities claiming to be well suited to a consolidating hub in western Europe. For example Bettembourg in Luxembourg, or Vienna in Austria. It depends on your destination which of these places is best.

Also in the east of Europe, Poland is not the only possible consolidation country. There is Hungary, Slovakia, Chech Republic and if all turns back to normal, there is Ukraine as a gateway to all these countries. Poland is however many steps ahead in this sense, as it has invested in its role on the New Silk Road from the start.

According to the Polish office of Rail Transport UTK, the key locations for Eurasian traffic are Łódź (Olechów), Gądki, Poznań, Swarzędz and Stara Wieś (near Kutno). For intermodal connections from countries across Poland’s eastern border, the most important stations are those in Łódź, Stara Wieś (near Kutno), Poznań and Warsaw, it said.

Aloia points out the potential of Brwinów near Warsaw, where Hupac will inaugurate its new terminal this September, a terminal designed to facilitate east-west traffic. This is the first of Hupac in Poland, but the company revealed its plans to construct this facility ten years ago, ahead of the New Silk Road boom.

Would you like to join the discussion about Poland and its role as a rail freight hub? On 7 & 8 September, the industry gathers in Warsaw for the 5th edition of the RailFreight Summit. You can register for this event here.

Do you want to watch the webinar? This is possible here.