Chinese New Year and the pandemic, something to worry about?

One year ago, China witnessed the outbreak of the coronavirus, just days before Chinese New Year, the biggest festival of the year. Trains were cancelled and trucks stopped moving; the impact of the rail freight industry was huge and worldwide. With yet another new year celebration around the corner, corona is all but gone. How will this affect the railway industry this time?

This will be the main topic of RailFreight Live on 29 January. At 1pm CET, four esteemed guests will discuss Eurasian rail freight in light of the Chinese New Year from our studio in Rotterdam. You can follow this on our YouTube Channel. The guests are:

Chinese New Year, which falls on 12 February this year, means a pause of work for several weeks. Millions of people move from where they work to their hometowns to pay their yearly visit, sometimes having travelled hundreds of kilometres. They only return several weeks later. In Europe, companies anticipate less train travel, and all the more in the weeks prior to the New Year celebrations in order to compensate for the lack of capacity.

This year, everyone is just a little more worried. In three provinces in the north local corona outbreaks have been reported. This has resulted in more than 2400 cases so far, a marginal number compared to the ongoing corona spread in Europe. However, mass travel could completely change this picture, so he Chinese government has responded with uncompromising measures. In order to travel (within China), three corona tests are required. In some high-risk areas, travelling is not permitted at all.

In the first instance, you would expect this to be a good thing for Eurasian trade, as there will be less of a production pause. Nevertheless, the measure will have its effect on the logistics industry. A shortage of truck drivers is expected, more than normally, reports RailFreight.cn. Those people that do go to their hometowns, may do so earlier than usual, afraid of more, stricter measures. And considering the waiting for tests results and additional quarantine rules, they may choose to stay longer. “As a result, the shortage of truck drivers will intensify and last longer than in previous years. This will undoubtedly affect the first and last mile of railway transportation”, RailFreight.cn reports.

Indeed, last year the first and last mile proved to be the most vulnerable chain in Eurasian logistics too. Once all factories resumed production and China went back to work, there were still thousands of truck drivers stranded in their villages, unable to return to work. Some of them did not return at all, local companies reported. This significantly slowed down the revival of rail freight between Europe and China.

The big difference between this and last year, is that the measures are in place already. This may refrain people from travelling. Last year, the Chinese New Year was extended when the corona virus appeared to be spreading throughout the country. The festivity started on 25 January, and was for most provinces extended till 10 February. Wuhan remained in a state of isolation until late March.

Once China went back to work, the coronavirus had reached Europe, resulting in factory closures overseas. In March large car factories in Europe closed their doors. Although at that point 90 per cent of train traffic to Europe had resumed, a part of the export could not be delivered, resulting in another hit for Chinese car and car part manufacturers.

Yet, despite all these challenges, rail freight between Europe and China has quickly recovered, and is even exceeding all expectations. In 2020, despite the worldwide pandemic, a total of 12,400 trains drove back and forth, carrying a total of 1,135,000 TEUs in goods. This shows an increase of 50 and 56 per cent respectively compared to 2019.

Among all the cities, Xi’an ranks first in train volumes, so does the route via Kazahstan and Belarus. On this main route, 9,679 trains made its way back and forth. But also the Middle Corridor saw a significant increase. A total of 2,297 trains was moved along this mulyimodal route via Turkey and Azerbaijan, an increase of 53.7 per cent.

The pandemic may have been part of the popularity of rail freight. Other modalities faced much harder hits, and many flights and sailings were cancelled. Moreover, a huge backlog of products was waiting to be shipped to Europe. As soon as truckers were back on the road, rail freight between Europe and China started booming. This happened already in March, which was noted as a record month in the history of Eurasian rail freight traffic. After that, many records followed.

For the past weeks, trains from China to Europe have been packed, and some companies have even organised additional departure, all to prepare for a period of reduced train travel during the Chinese New Year holidays. One can only hope that this year, the period lasts only weeks, and not months before business is back to usual.

In RailFreight Live: how to avoid congestion after Chinese New Year? 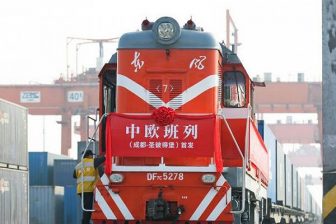