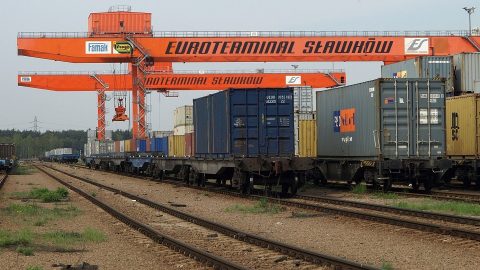 With the help of the Broad Gauge Line, Poland has launched a new transit route from China to other parts of Europe. Sławków, the railway’s western terminal, has a convenient location and other attractive options, argues Dariusz Sikora from PKP LHS, the company that operates the Broad Gauge Line. After two successful trains from Xi’an to Sławków, PKP LHS is ready to open up new connections from China.

In early January and February, PKP Linia Hutnicza Szerokotorowa (PKP LHS) made headlines with its two trains from the Chinese city of Xi’an to Sławków, the westernmost terminal of the broad gauge railway in Poland, and, of  the European Union. The first shipment of 40 containers was delivered to Euroterminal Sławków on 7 January, while the second batch of 55 containers arrived at the Polish hub on 1 February.

“In the logistics business, it is not enough to show some route on a map. It is much better to demonstrate that the route you offer is working and the transport is performing well. With these two trains, we show that the route from China to Poland via the Broad Gauge Line functions well and Euroterminal Sławków is ready to receive other new trains”, explains Sikora, who is a member of the board for trade and operation at the company.

For his company, these container trains are a good opportunity to diversify freight traffic on the Broad Gauge Line. The 395-kilometre railway from the Ukrainian border to Sławków was constructed for delivering iron ore and coal from Ukraine to Katowice Steelworks (now ArcelorMittal Poland Dąbrowa Górnicza).

“Annually, we transport around 10 million tonnes of freight. This figure could vary from 9.5 to 10.5 million tonnes. Of this volume, around half is iron ore, which we deliver to our partner ArcelorMittal. The remaining half is other types of freight. Among them are containers with annual traffic of around 16,000 – 17,000 TEU. With the new connections from China, we want to increase this figure”, the company’s board member clarifies.

That is why PKP LHS does not want to stop with two trains and plans to receive others. “In February, two trains had been scheduled. Due to the coronavirus outbreak in China, they have been cancelled. In March, two trains departed from Xi’an and will arrive in Sławków at the beginning of April. In April four more trains are scheduled to depart from Xi’an. I think that we will keep similar frequency in the following months”, Sikora adds with optimism.

Fast route between China and EU

“After the two trains from China have arrived in Sławków, we had and still have many questions from various companies of Poland, other European countries and China. They are asking about the opportunities and features of our train connection and our route”, Sikora notes. The trains from Xi’an to Sławków cross a distance of around 9,500 kilometres. In terms of time, the delivery could be performed in 11 days. The second shipment has already proven this.

The route from China to Sławków goes via Kazakhstan, Russia and Ukraine. “Our two trains showed very good lead times. They ran through Kazakhstan and Russia at an average speed of around 1,000 kilometres per day. They also showed very good transport times in Ukraine. The journey from Suzemka to Izov took around 1.5 days”, Sikora explains.

According to him, the route from China to Poland via the Broad Gauge Line has three other advantages. “Our route has the same gauge as in Ukraine, Russia and Kazakhstan. As a result, we do not need any other loading operations on the borders between these three states. There is only one transshipment on the route from China to Poland, on the Chinese – Kazakh border. This allows us to save a lot of time”, he clarifies.

Compared to the traditional route via the Brest/Małaszewicze border crossing, the connection via the Broad Gauge Line is shorter. “If you need to deliver some freight to southern Poland, Germany, Czech Republic, Austria, Slovakia or Hungary, our route is a good opportunity. It is shorter than via Belarus. You save some distance and, of course, there is no transshipment like in Małaszewicze”, the representative of PKP LHS argues.

Another advantage is the convenience of the Broad Gauge Line itself. “Our railway is a freight-dedicated line. We have no passenger trains, and we have no traffic jams. Therefore, freight can be transported in the fastest way possible. We run the distance from Hrubieszów (the border and starting point of the Broad Gauge Line in Poland) to Sławków in eight hours”, he adds.

In November 2018, PKP LHS signed a memorandum with two Chinese companies, China Railway Tielong Specialised Container Logistics B.U. and China Communications and Transport Association, for the launch of a container train from Chengdu. Sikora says that this connection is still on the agenda. “We are still in dialogue with Chengdu. However, the company from Xi’an, I mean Xi’an Free Trade Port Construction and Operation, was more active. Moreover, we are negotiating with other Chinese companies. We are open to other connections”, he specifies.

At the same time, Dariusz Sikora recalls that the containers delivered by the two trains from Xi’an to Sławków were dedicated to several customers in Poland and other neighbouring countries. “We plan the same for future connections. Euroterminal Sławków is not only the westernmost point of our broad gauge railway but it is connected to the remaining railway network of Poland. From Sławków, the containers can be moved further: by lorries to any destination in Europe or by rail to any intermodal terminal in Poland as well as to some locations in Italy and Germany, including Duisburg. Therefore, we regard Sławków as a distribution centre. It has many opportunities to become a new logistics hub in Central Eastern Europe”, he sums up.

Do you want to hear more about the railway line from Xi’an to Sławków? At the RailFreight Summit in Poznan, Aleksandra Adamska from PKP LHS will speak about this new opportunity. This event has been rescheduled due to the corona crisis and s now held on 1, 2 and 3 September. Registration is open. 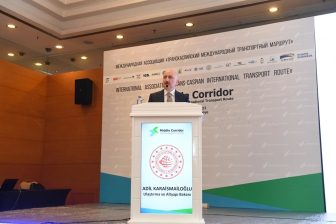 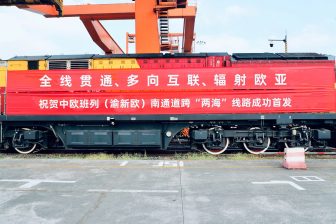