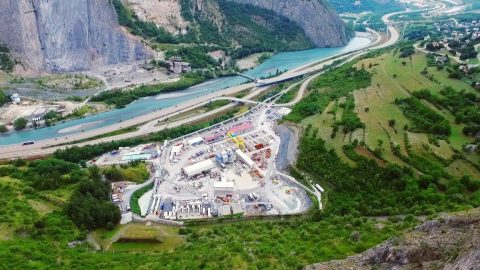 New access railway lines to the Turin-Lyon tunnel from Lyon might not be ready before 2045, more than a decade after the expected commissioning of the structure in 2032. This is because the French government seems more inclined to modernise the historic Dijon-Modane railway line, which does not pass through Lyon.

In other words, Dijon might get access to the tunnel long before Lyon does, which is not what the project would entail. This transpired from a LinkedIn post from Transalpine Turin-Lyon, the official committee for the Turin-Lyon project. The post mentioned a report written by the Orientation Council of Infrastructure (COI), which was leaked and published by French online media outlets Mobilettre and Context on 16 January.

Since October up to 12 December, the COI worked on proposals for prioritising investments in the French transport infrastructure. Context mentions that nearly 40 versions of the report have emerged since that date and that the one leaked by Mobiletrre was dated 6 January and its appendices have been slightly revised since. According to the committee, the report will be officially published in the next few days and the government is expected to make a final decision in the following months.

The COI report includes three solutions for access roads to the Turin-Lyon tunnel. These solutions were ironically reviewed by Transalpine Turin-Lyon. The first proposal is the modernisation of the Dijon-Modane railway line. The line passes near Lyon but would not be part of the Turin-Lyon project as it would meet the Lyon-Turin only at the entrance of the international base tunnel, in St-Jean-de-Maurienne. However, the COI is planning to make it a permanent French access to the cross-border tunnel.

For this project, up to 600 million euros will be necessary, with completion expected by 2030. This would mean that studies and construction for the French section of the Turin-Lyon won’t start before 2028 and 2038 respectively. However, Transalpine claims that even a modernised Dijon-Modane line won’t be able to handle the expected volumes of 25 million yearly tonnes (or 162 freight daily trains) coming from Italy. Moreover, this initiative would cause delays in the construction of the French section of the Turin-Lyon railway.

The IOC’s report’s second proposal is that studies for access roads to the French section of the Turin-Lyon there would commence only in 2028 and construction in 2038. This means that these projects will not be ready before 2045, leaving the French line with no access roads near Lyon for over ten years. The final recommendation from IOC is to accelerate the works to desaturate the railway network surrounding Lyon and complete them by 2035-2037. These projects include doubling the track between Saint-Fons and Grenay and works on the section between Leyment and Saint-Pierre-de-Chandieu.

The reaction of the Transalpine Turin-Lyon

La Transalpine Lyon-Turin showed their disapproval on LinkedIn, where they claimed that this initiative does not reflect the objectives and ambitions of the Turin-Lyon project. Moreover, the committee pointed out that the data used by the IOC to back its proposals does not consider the freight capacity objectives on the Italian section of the project. “It remains to be hoped that the arbitrations expected from the government do not follow the advice of senior officials”, they concluded.

The committee’s president, Jacques Gounon, expressed his dissent in a press release. Gounon accused the report of not being compatible with the current project. “After years of procrastination, this proposal is clearly not up to the challenges of such a structuring link for the ecological transition and the European rail network”, he continued. According to him, the report “condemns the declaration of public utility of the French section signed in 2013 and whose validity expires in 2028”.