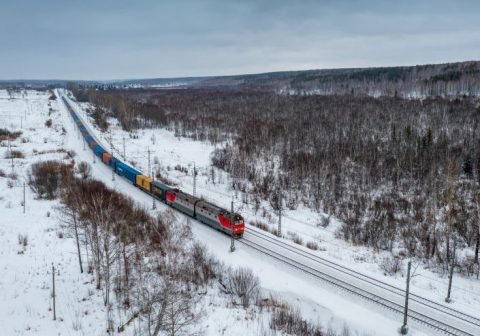 A freight train has derailed in Eastern Russia. In total, 22 wagons went off the track, causing delays for multiple trains on the route. According to Trans-Baikal Railway, the operator of that section, no one was hurt in the accident.

“According to preliminary data, on January 18, 2023, at 7:38 local time on the Dzhiktanda-Taldan section of the Trans-Baikal Railway, 22 wagons of a freight train derailed”, Trans-Baikal Railway writes on their website. “There were no casualties, there is no threat to environmental safety.” Information on the type of transported cargo is not provided by Trans-Baikal Railway.

The accident happened between the cities Skovorodino and Magdagachi, in the Amur Oblast, close to the Chinese border. This railway section is operated by Trans-Baikal Railway, a subsidiary of RZD and has been temporarily suspended. When the track will be operable again, is yet unknown.

To repair the impact of the accident, recovery trains were sent to the scene from the nearby stations Skovorodino and Magdagachi. According to the Russian news website RIA, more than 330 rail workers are working on the repair of the track. The work is carried out in heavy weather conditions with temperatures dropping to 46 degrees below zero at night.

Excusingly, all media, “ours”, etc. wrongly and misleadingly, names derailments etc. as “accidents”.
As direct related a calculated risk, now broken rails, by far, single, most frequent cause of derailment, is not in words meaning an “accident”., etc.
Alternatively, at a track design, proving safely calculable – now requested… – where wheel load and forces/stresses imposed, are low and safely limited, Industry, as all other serious public affairs will provide, for safety factors, the needed!