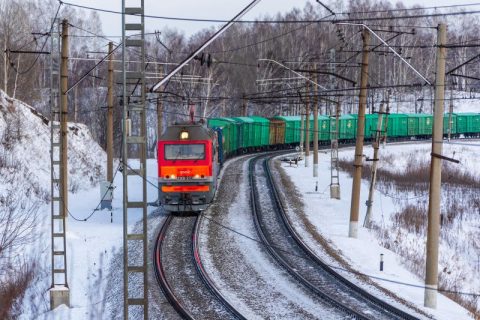 Cargo transportation by the Russian Railways (RZD) decreased by 3,8 per cent over 2022. RZD transported roughly 1,2 billion tons of cargo last year, with a peak in the transport of coal, grain and building materials during December, saving the year.

Although the total cargo volumes decreased, the numbers are better than expected earlier this year. Oleg Belozerov, the head of RZD, stated in November 2022 in an interview with the Moscow Times that transported volumes would go down with 125 million tons, roughly 10 per cent of the total volume of 2021. In the interview, Belozerov blamed the downfall on restrictions imposed by western countries.

Transportation in the east of Russia, over the so-called Eastern Polygon, slightly increased over 2022. A total of 158 million tons of cargo was transported over the tracks from Novosibirsk to Vladivostok. According to RZD, that is five million tons more than the initial target.

RZD further explained that in December 2022, the total amount of cargo shipped via rail added up to 102,7 million tons. In the last month of 2022, coal, grain and building materials transport increased significantly, thus contributing to better-than-expected results.