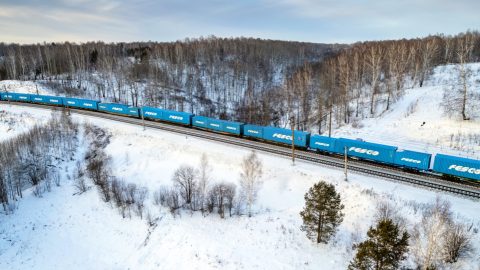 FESCO enters 2023 with an appetite for records

In early January, FESCO’s rail operations reached a new record high. The company managed to dispatch 53 container trains in just a week from the Vladivostock region towards Central and Western Russia. The previous-now broken- record was set in December 2022, when FESCO dispatched 50 trains in a week.

The total loading of the container trains was more than seven thousand TEUs. All of them were 100 per cent full, with an average length of 62,5 conventional rail cars,” explained the company.

In the past year, FESCO launched 22 new intermodal services. Some of the most prominent ones were those linking Moscow to China, Korea and Japan via the port of Nakhodka and Japan to Uzbekistan via China and Kazakhstan. The first was just launched last December. Using the port of Nakhodka as the entry point to Russia, this service links eleven different ports from the countries involved to Moscow. After consolidating cargo at Nakhodka, FESCO loads it on trains that carry it all the way to the Russian capital.

The latter was launched in September, connecting the port of Yokohama (Japan) to the port of Lianyungang (China, Jiangsu Province). From Lianyungang, containers proceed by rail to Kazakhstan, and after reloading in Khorgos – Altynkol, they also continue by rail until they reach the Chukursai station in Tashkent, Uzbekistan’s capital. The service runs twice per month and focuses mainly on transporting car parts.