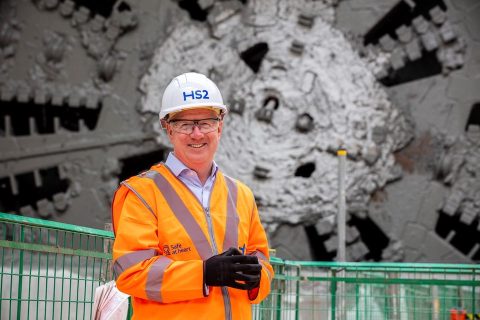 Work has begun to lay freight tracks at West Ruislip, in the northwest of London, as HS2 moves into the peak of construction. The sidings are supporting the construction of the high-speed railway between London and Birmingham. The facility is anticipated to shortly start receiving trains with prefabricated tunnel segments, intended to line the West Ruislip to Willesden bores.

HS2 Limited boss Mark Thurston has said 2023 will be the year in which HS2 ramps up to peak construction activity. That expectation comes as the chief executive delivered his year-end summary of the project, calling it a year of momentous progress. However, for the people of Ruislip, it has been two weeks of calm. The tunnel boring machines have been switched off over the festive period, with work starting again this week.

With a significant proportion of the HS2 line underground, several tunnel boring machines (TBMs) are employed along the more than 100 miles (160km) of the route between London and Birmingham. HS2 Limited, the company formed to build the new high-speed railway, launched another three TBMs in 2022, including those on the West Ruislip to Willesden tunnel. It’s expected that the bores on that tunnel alone will generate over half a million tonnes of spoil. The West Ruislip facility should help with the removal of that load – without overburdening the local road network – something HS2 has been at pains to avoid. “There are five Tunnel Boring Machines currently digging underground”, say HS2. “Two giant outdoor mega-factories, 1.7 miles [2.7km] of conveyor belts and a total of 17.6 km of tunnels have already been built as part of the delivery of HS2.”

The West Ruislip site, easily visible from surrounding surface infrastructure, is among the highest profile HS2 construction sites, rivalling the London terminus at Euston, where a panoramic tour is easily afforded from the top deck of a London bus on adjacent Hampstead Road. “Major civil engineering works are now well underway” ten of our construction sites going completely diesel-free and a first tunnel breakthrough. With 23 billion [pounds – 27.4 billion euro] contracted into the supply chain and over 350 active sites between Crewe, the West Midlands and London, supporting over 29,000 jobs.”

Mark Thurston reflected on the other significant milestones for the project and looked forward to the coming year. In particular, HS2 has cleared a legislative process hurdle on the way to the extension to Manchester. “The depositing of the Bill [the legal instrument to initiate a debate in parliament] to take HS2 to Manchester, establishing initial sites on phase 2A in Staffordshire [to connect HS2 with the existing West Coast Main Line], the first breakthrough and then complete end-to-end of an HS2 tunnel, and fantastic progress at all four phases one station sites.”

HS2 may be most visible at West Ruislip, but the effects of the project are being felt in many less obvious places. “Right now, HS2 is delivering jobs for almost 30,000 people”, said Thurston. “Tens of thousands more [are] supported throughout our wider supply chain. Over 2,800 companies have contracts with HS2, ensuring the project is helping grow the UK economy long before a single train starts running.”