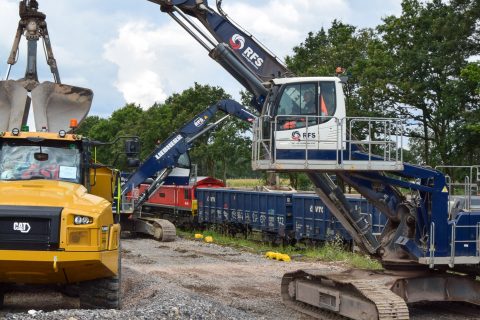 Published on 11-08-2021 at 11:27
Excavators unloading material delivered by freight train into the articulated dumper trucks to store at the site in stock piles

Britain’s high-speed rail project HS2 claims it will take an extra 24,000 heavy goods vehicles off the UK roads. The project builders have opened a new aggregates terminal in rural Buckinghamshire, north of London. The new rail freight depot follows on from a temporary opening in December last year, near the village of Calvert.

HS2 – the high-speed link between London and Birmingham, currently under construction – has announced the opening of a new railhead near the village of Calvert. The project managers say it will help the high-speed rail project continue to deliver construction material by rail to its biggest Buckinghamshire site. They say it will avoid putting extra lorries on local roads.

The new Calvert railhead is the second to be opened at the site. It follows on from the temporary facility opened at the end of 2020. The new Calvert railhead will allow HS2 to run an extra 150 aggregate trains over the late summer. According to the company, that will save 8,300 tonnes of carbon and take the equivalent of 24,000 trucks off the roads.

Once work is complete, HS2 will pass by Calvert in a 2,5 mile long (4km) cutting roughly following the disused Great Central Railway route. There will be a spur off to a new Infrastructure Maintenance Depot from which engineers will repair and maintain the new line. The Infrastructure Maintenance Depot – which is expected to create around 180 jobs locally – will sit alongside the new East-West Rail line, which is currently being reopened in stages between Oxford, Milton Keynes, Bedford and Cambridge. The East-West Rail line is a project to reopen a line closed in the 1960s as part of a radical rationalisation of the UK network. The reopened East-West Rail line will cross HS2 just north of Calvert.

HS2 is co-operating with the construction of the East-West Rail project. To reduce overall disruption for residents and boost efficiency, the HS2 project company will deliver around 2 miles (3km) of earthworks for East-West Rail, including a spur to allow a potential East-West Rail extension to Aylesbury. HS2 Ltd’s Senior Project Manager, Paul Marshall, outlined the works involved.

“We’re making strong progress at Calvert, and the opening of the new railhead means that we can continue to deliver huge amounts of materials by rail, taking trucks off local roads and reducing disruption for the local community”, he said. “We’ve been working closely with Network Rail, EKFB [the local HS2 project partners] and the freight operators for many years to make this possible, and to deliver not only low carbon journeys for our passengers, but also cut carbon in construction.”

4000 jobs in the region expected

HS2 says that already 369 freight trains have been dispatched at the first Calvert railhead. By the end of the year, they anticipate more than 840,000 tonnes of construction materials will have been delivered, taking the equivalent of 84,000 trucks off the roads and saving 29,000 tonnes of carbon.

Construction work in the section is being managed by HS2’s main works contractor Eiffage, Kier, Ferrovial and Bam Nuttall, collectively known as EKFB. The consortium delivers the 50-mile (80km) central section of the route, including 17 viaducts, 81 bridges and three ‘green tunnels’ – designed to mitigate wildlife habitat intrusion. The consortium says it is set to create 4,000 jobs over the next two years. The trains are operated by DB Cargo UK and Hanson.

Across the whole HS2 project, 15,000 freight trains are set to haul ten million tonnes of aggregate to construction sites. HS2 say that will take the equivalent of 1.5 million trucks off the UK roads.