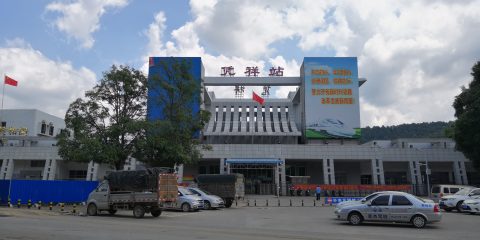 The first route from Vietnam to Kazakhstan was launched on 31 December. The train departed from Pingxiang Railway Station in Guangxi, in southern China, and reached the Xi’an dry port, in the east of the country for assembly. The train was then sent to Kazakhstan via the China-Europe Express. The main products transported by this vehicle are electronic parts produced in Vietnam.

According to China Central Television (CCTV), in the past, most of the electronic parts produced in Vietnam were transported to Central Asian countries via the sea. However, due to the restrictions on the outbound plan and the unstable shipping time, the whole process took about 50 days. This new route can compress the itinerary from Vietnam to the Central Asian market to about 25 days. This is not the first time that Vietnam has taken the China-Europe Express train to transport goods through the Eurasian continent.

The first China-Vietnam and China-Europe train was launched on 27 July 2021. According to CCTV news, a total of 47 trains have already been operated since then, with a total of 2,162 standard containers and 9,442 tons of cargo. In the past year or so, there have been ups and downs, and waves have risen again. In early March 2022, the direct train from Da Nang, on the eastern Vietnamese coast, to Europe will be put into operation.

The train is scheduled to depart from Da Nang and reach Zhengzhou with the China-Europe Express. From there, the convoys will be sent to Europe, unloading in cities such as Liege in Belgium, Hamburg in Germany, and Melzo in Italy. However, due to the impact of the war in Ukraine, the inauguration of this new route has been delayed. Under the background of the relocation of many Chinese factories to Vietnam, Vietnam’s railway freight has gradually become a market that many colleagues have begun to care about. However, the gauge is a big problem.

A market to be developed

Since Vietnam uses the meter gauge, replacing it with the Chinese standard gauge is a time-consuming process. The good news is that General Secretary of the Vietnamese Party Nguyen Phu Trong paid an official visit to China at the end of October. During the visit, he discussed how to promote cooperation in air, land, and railway transportation between the two countries.

One of the ambitious projects is to change Vietnam’s gauge as a way to boost Sino-Vietnamese trade. According to data released by Nanning Customs in Guangxi Zhuang Autonomous Region in October 2022, a total of 607,000 tons of goods crossed the Sino-Vietnamese border. However, this market still needs to be developed. According to the Ministry of Transport of Vietnam, by 2030, the import and export volume of railway goods in Vietnam will reach 5 million tons.

This article appeared originally in our sister publication RailFreight.cn.