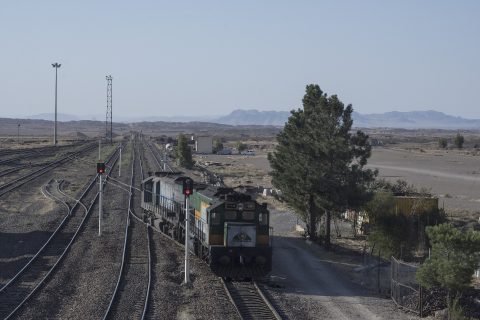 Iran and Kazakhstan agreed on starting a test run at the beginning of 2023 for a multimodal sea-rail freight service to give landlocked Kazakhstan a connection to the Persian Gulf. The two countries are forming a technical committee to analyse the feasibility of a rail freight service from the north of Iran to the port of Bandar Abbas in the south.

Astana and Theran have recently joined forces for port and logistics operations in the port of Bandar Abbas. Kazakhstan is interested in reefer container services transporting meat and livestock products, grain and flour, and other bulk goods via Bandar Abbas. Such a service will also open up new possibilities for Iran to ship commodities to Central Asia and the CIS countries.

Iran and Kazakhstan want to boost the INSTC

As Hossein Abbasnejad, the director general of the Ports and Maritime Department of Hormozgan Province, mentioned, this cooperation plans to boost traffic on the International North-South Transport Corridor (INSTC). According to Abbasnejad, the corridor is, in fact, gaining relevance after the Russian invasion of Ukraine. This is because some customers prefer to bypass Russia when carrying out transportation services.

A Memorandum of Understanding was signed between Iran and Kazakhstan on 31 October, which aims at increasing the cooperation between them. The two parties have agreed to increase the volume of cargo transiting from Kazakhstan to Iran to four million tonnes a year, which would equate to a 400 per cent growth compared to current numbers.

More Iranian projects on the INSTC: a connection to Armenia

Last week, Iran also agreed with Armenia to create a connection between the two on the INSTC. The new connection, which will be via road and not via rail, will link Tatev, in southern Armenia, with Tabriz, in northwest Iran. Ali Ziaee, Director of Transportation Research Groupe at ITAN, shed some light on why, for this route, road was chosen over rail.

The two countries considered the option of a rail connection in 2021 after Azerbaijan banned traffic on the Goris-Kapan Highway in southern Armenia, as Ziaee mentioned. “Currently, the most available option for the Iran-Armenia rail connection is re-opening the Jolfa rail border and re-activating rail freight between Azerbaijan and Armenia. The rail networks of these countries are integrated into Caucasus, Russia, and CIS. As a result, the Jolfa railway can connect Europe to the Persian Gulf,” Ziaee commented.

This option, however, is not well seen by Armenia, which issued a transport blockade on Azerbaijan and Turkey, halting operations on the Jolfa railway. Russia has been quite vocal in asking Armenia to lift the said ban, or it will risk exclusion from the INSTC project.