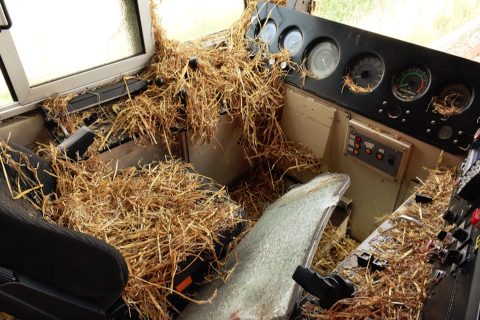 UK’s Rail Accident Investigation Branch (RAIB) has issued its report on the collision between an intermodal working and an agricultural equipment trailer at Kisby, an accident that happened on 19 August last year. RAIB has addressed both Network Rail and the UK Health and Safety Executive over the serious shortcomings exposed by the accident.

On 19 August 2020, the early departure (04:10 hrs) intermodal freight train service from Hams Hall Birmingham to the Port of Felixstowe collided with agricultural machinery being towed over the railway by a tractor at the Kisby user worked crossing. The rural location lies between Whittlesey and March in Cambridgeshire.

The train was travelling at about 66 mph (106 kph) when it struck the machinery. The train driver suffered minor injuries in the accident. The tractor driver was uninjured. The locomotive and one wagon derailed, with both suffering some damage. There was also extensive damage to the infrastructure of the railway. The train driver escaped greater harm by swiftly taking refuge behind a acb bulkhead in the moments before collision.

In their findings, the RAIB put the accident down to the actions of the road user. “The accident happened because the tractor driver did not telephone the signaller before crossing the railway to seek permission to cross”, noted the official report.

“This was a consequence of the tractor driver not being briefed about the requirement to call the signaller and his belief that he could cross safely by looking for approaching trains”, said the RAIB. “This probably arose because the authorised user, the person owning land on both sides of the level crossing, was not briefing crossing users in a way which resulted in correct use of the crossing, and railway staff were unaware that this was the case until shortly before the accident.”

RAIB found that the infrastructure management agency Network Rail was not effectively managing the safe use of Kisby. There were also identified shortcomings at some other user worked crossings with telephones. RAIB said that this was an underlying factor for the accident.

As a result of its investigation, RAIB has made two recommendations, one addressed to Network Rail and one addressed to the Health and Safety Executive. These seek improvements in the management and assurance processes applied to user worked crossings. They also require additional means of communicating crossing safety information to agricultural workers. RAIB has also written to several organisations representing farmers asking that they remind their members of the importance of following correct procedures at user worked crossings.

At which point did common sense not prevail ??🙄