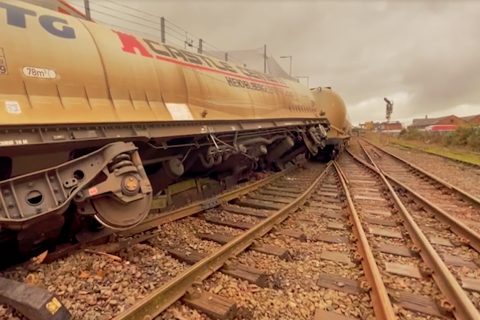 Hopes that the lines to the south east of Carlisle would be reinstated within one week have been dashed. Last week’s derailment of a fully laden cement train, at a critical junction, is proving more difficult than hoped. Recovering the rolling stock, and assessing significant damage to infrastructure at Petteril Bridge Junction, is proving challenging for engineers.

Operations are continuing to recover several freight wagons which derailed a week ago on the outskirts of Carlisle. The accident has blocked lines to Newcastle on the east coast, and access to the Settle and Carlisle route. The latter provides vital freight capacity as an alternative to the heavily trafficked West Coast Main Line, Europe’s busiest mixed traffic route.

In an update to the initial report issued by the safety watchdog, the Rail Accident Investigation Branch, Network Rail has confirmed that the derailment involved one locomotive hauling 14 wagons, each filled with 80 tonnes of powdered cement, as it travelled between Clitheroe and Carlisle on Wednesday 21 October. Five of the wagons derailed shortly after 8pm at Petteril Bridge Junction, Carlisle. Network Rail has released trackside footage of the recovery scene.

Over the weekend, under the management of the UK infrastructure agency Network Rail, work continued to recover the distressed rolling stock. “Of the five wagons which came off the tracks, two have been righted on the rails, and the remaining three will need to be lifted out by crane”, said their statement. “Specialist contractors have been carefully emptying the wagons of all their cement – so each wagon’s 20 tonne weight can be lifted safely”, said Network Rail. “More than 110 tonnes of cement has been extracted from the five affected wagons so far. It’s estimated all of the material will be emptied from them by the start of [this] week.”

The UK Environment Agency is continuously monitoring the site. So far, they report that there have been no spillages into the River Petteril during the recovery process. Freight services face either long delays to route via the West Coast Main Line at quiet times (ostensibly overnight) or to use the East Coast, which is almost as busy. Passengers face replacement road transport which, although slower may not be too uncomfortable, given the relative age of the rail and road rolling stock.

“We continue our difficult work to recover the derailed freight wagons”, said Phil James, Network Rail’s North West route director. “We’re working with multiple agencies to get to a point where the recovery operation can end and our major railway repairs can begin. There is still a lot of work to be done until we get to that point over the next several weeks.” The agency will also have to assess the condition of the bridge which carries the junction, and was damaged in the incident.

Clearing up the aftermath of the derailment continues to be complicated by several factors. This includes working in the difficult terrain where the 100 tonne wagons came to rest. To account for the unstable ground conditions, plans are still being finalised for the transportation and construction of the large crane needed to lift the wagons so they can be taken away by rail accident investigators. An initial report published by the Rail Accident Investigation Branch found that a fault with a train wheelset was the most likely cause of the derailment.

Network Rail has visited nearby properties to liaise residents and owners with more details of how the recovery and repair work could impact them. Rail lines are now expected to be closed well into November. This is impacting all traffic which would normally run on the Tyne Valley line between Carlisle and Newcastle and the Settle and Carlisle line between Carlisle, Appleby and Skipton, on to Leeds and the south.