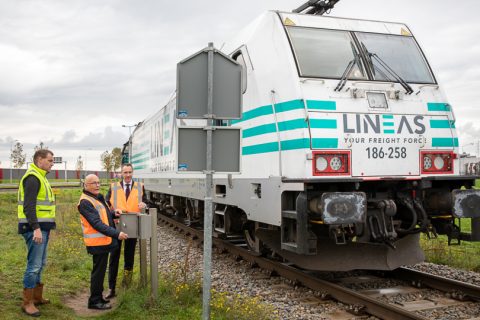 The completion of a renovation project at the Combined Cargo Terminals (CCT) in the Dutch port of Moerdijk signals a new beginning for rail operations. A symbolic opening of the multimodal terminal on Friday, 21 October, by the coordinator of the North Sea-Mediterranean Corridor set the floor for more trains at a port that puts rail freight at the heart of its growth path.

This is not the first time the port of Moerdijk has seen rail investments becoming a reality. The specific investment at CCT targeting the improvement of access, safety and operational time efficiency for the terminal was implemented jointly by CCT, the port of Moerdijk authority and Dutch infrastructure manager Prorail. The three parties invested 12 million euros in total, while the Connecting Europe facility for Transport fund provided an additional 2,5 million euros.

CCT’s renovation was all about accessing the terminal for trains. The port of Moerdijk, the largest inland port in the Netherlands, has sufficient road and rail infrastructure that cross routes at multiple points. As a result, the port infrastructure has level crossings where trains must pass through and sometimes wait on them, thus unnecessarily stopping car traffic and sometimes waiting too long to enter the CCT terminal.

As a result, the project’s partners decided to resolve this bottleneck by fitting three railway crossings with an automated safety system. Specifically, they deployed a “train warning system consisting of command control and audible and visual signalling components” also linked with the traffic lights of the ring road around the port and CCT’s gate.

Understandably, the investment will contribute to syncing the port’s safety and signalling operations into one comprehensive system, which will also improve time management and provide more rail capacity indirectly. “If a train approaches the CCT terminal, the driver will open the gate to the terminal with a push of a button and then activate the level crossing with a push of a button. Road traffic then gets a red light, and the bars go down. The freight train can then safely pass the level crossings and directly enter the terminal site through the open gate. Thanks to the link with the gate, the train can drive through in one go and does not unnecessarily occupy the level crossings,” explained the port of Moerdijk.

“The renovation contributes to greater railway capacity and supports the ‘modal shift’ which the port of Moerdijk advocates to increase via water and rail transport. For us, rail is an important addition to our shortsea strategy,” said Marika Menspoel-den Hartog, directorate of the Moerdijk Port Authority.

Indeed, as mentioned before, the Dutch port has strong ambitions for its rail products and has invested before concerning the rail freight industry. Its main goal is to receive around and maybe more than a hundred weekly trains. For this reason, in early 2021, a third 740-metre-long track was added to CCT’s infrastructure. Moreover, the port, along with ProRail, railway undertakings, terminals and customers, have launched the Lean Moerdijk 2.0 project to improve capacity planning and allocation since the port’s rail infrastructure prospects are very particular and need optimal utilisation. Hopefully, the signalling and accessibility investments will add another stone to what the port aims to build regarding rail freight transport.