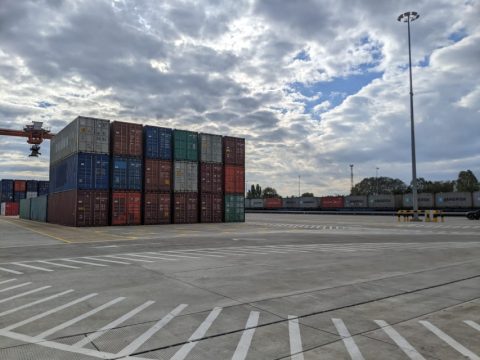 ‘Ukrainian flows on rail are here to stay’

Even after the war in Ukraine ends and the country’s ports reopen, a substantial part of the grain and other cargo volumes will remain on rail tracks on their way to Central-Western Europe. This was the central takeaway of a roundtable discussion during the opening day of the RailFreight On Tour-The Hungarian Edition at the East West Gate intermodal terminal in Fenyeslitke, Hungary.

All experts agreed that the opportunities presented during this otherwise harsh period of war could be capitalised on in the future and make rail freight a central component for Ukrainian flows and Hungary one of its most important gateways towards the rest of European countries.

“We are only at the beginning”

When discussing the future of Ukrainian cargo on rail, Vernes was pretty straightforward: “we are only at the beginning,” he said, stressing that the current flows are a huge opportunity for the rail sector. However, he mentioned that it is unclear how long this opportunity will be around and urged the rail freight sector to “capitalise on it as soon as possible”. He added that rail infrastructure investments should also follow, yet, launching efficient services is the first step to attract those investments.

On their behalf, Gábor and Hernád underlined that despite the war, import rail volumes have increased in Hungary, obviously due to Ukraine’s export needs. Despite Talosi agreeing with Vernes that you cannot predict the future, he appeared pretty confident for one thing; that “rail routes will remain even if the Odesa port completely reopens.” Hernád also provided a more tangible forecast. “The prognosis is that if we keep offering options and services, the flows will remain even after the war ends,” she said.

Additionally, she highlighted Hungary’s role regarding these flows since she mentioned that Ukrainians now value transit alternatives through Hungary instead of only through Poland. The opening of the Adriatic corridor through the country played a crucial role in that, and that is why Ukrainian companies already consider using the route in the future.

According to Balogh, rolling stock has never been an issue for RCG since he claimed that they have the needed capacity. Yet, Talosi disagreed, underlining that rolling stock in Hungary, especially in terms of grain transport, is not where they need it to be. Nevertheless, Talosi said that collaboration between different companies in the country is the key to resolving this issue.

His comment indirectly touched upon another discussion point-that of competition in the country regarding Ukrainian volumes. Apart from Talosi saying that close cooperation is key, Gábor was also very illustrative: “the cake is big enough to satisfy everyone’s appetite. I believe we are not competing with each other,” he concluded.