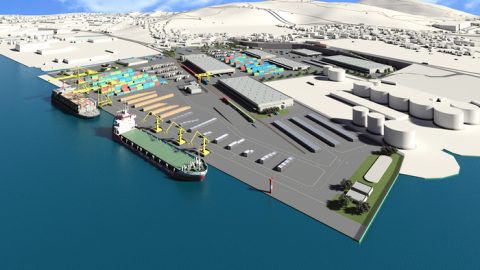 The terminal, named Adria Port, will function as an import-export platform for Hungary. It will be built in the area where the Aquila refinery, which was closed in the 1980s, used to be. The total investment amounts to 200 million euros, 45 of which will be financed by the Italian Plan for Recovery and Resiliency. Construction is expected to take roughly two years.

The area will cover 34 hectares and it will be equipped with new quays for 650 metres. The terminal will also have a rail connection with the Aquilinia station, 10 kilometres from the heart of the port. As Peter Kiss-Parciu, Head of Department for Cross-border Economic Cooperation at Ministry of Foreign Affairs and Trade, told tristeallnews, this terminal will offer Hungary an opening on the sea, which the country does not currently have directly within its borders.

The rail at the center of the project

The railway will in fact be the protagonist of the new terminal. There are already six to eight daily trains between Trieste and Budapest, number which will increase once the terminal is completed. The Aquilinia station is also undergoing maintenance works. The station will soon be equipped with four tracks suitable for 750-metres-long trains, which will be able to carry 40-foot containers as well as megatrailers.

The new terminal signals a new chapter for the relationship between the two countries. So far, Hungary preferred relying more on the port of Koper, in Slovenia. As Zeno D’Agostino, president of the Port Authority for the East Adriatic Sea, pointed out that the project was to be carried out in Koper, but Trieste managed to obtain the funds and consequently won the terminal.

The topic will also be discussed at the RailFreight On Tour-The Hungarian Edition, to be held on 19 & 20 October in Debrecen. Rail freight professionals will have the chance to visit Hungary and see the developments taking place there first-hand, while also networking and connecting with local and international players active in the country. You can find more information about this event here.