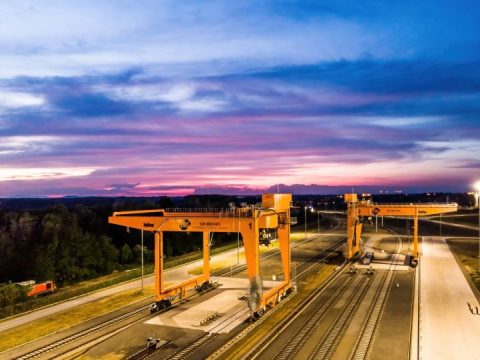 The first train arrived at the East West Gate intermodal terminal in Fenyeslitke, in northeast Hungary, close to the Ukrainian and Slovakian border on Tuesday, 18 October. RailFreight.com was there in the context of our RailFreight on Tour-Hungarian Edition event, which was organised in Debrecen.

The East West Gate intermodal terminal, inaugurated earlier this week, is expected to handle up to one million TEUs annually. It covers an area of over 85 hectares, and a 10-kilometre-long railway was built as well as a 15,000 square metres warehouse. The terminal is also equipped with cranes that can be remotely operated thanks to 5G technology.

The RailFreight.com team visited the terminal with the event delegates. Attendees were able to tour the site’s facilities, while a roundtable discussion was also held at the terminal concerning the transportation of grain and other cargo via rail once the war in Ukraine is over.

Watch the video to find out more: