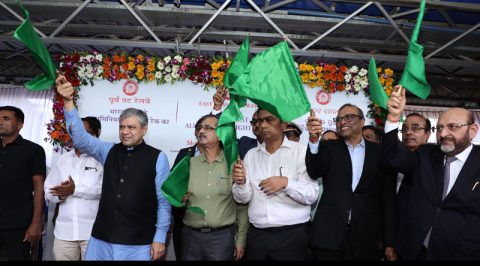 The aluminium rake train already runs since it departed on Sunday, 16 October, from Bhubaneswar, the capital city of Odisha state, in the east of the country. Indian Railway Minister Ashwini Vaishnaw flagged off the inaugural trip. The first convoy, equipped with a new 61-wagon rake, was loaded with coal to be transported to Hindalco’s aluminium facility in Lapanga, near the Hirakud Reservoir lake.

The wagons were manufactured with high-strength aluminium alloy plates at Hindalco’s facility in Hirakud, roughly 300 kilometres from Bhubaneswar. Thanks to the use of aluminium instead of steel, the wagons are corrosion-resistant, a feature that will save time and resources for maintenance.

Despite being 35 per cent more expensive to build than common rakes, aluminium wagons are expected to last around ten years longer than steel ones and to maintain a higher resale value. Thanks to the new rake, moreover, it will be possible to carry 180 tonnes more cargo. This project should also help India decrease the imports of nickel and cadmium in favour of the domestic aluminium industry.