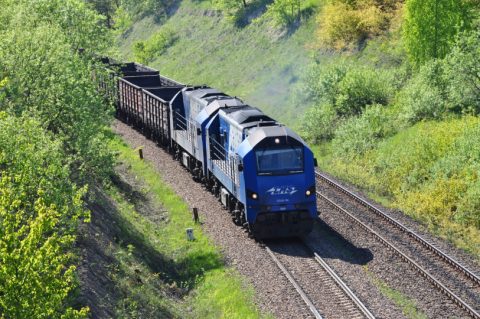 Coal transport Poland-Ukraine up and running via Sławków

The 100,000 tons of Ukrainian coal destined for the Polish market are already transiting by rail between the two countries. PKP LHS is solely responsible for their transportation, using the Izov border crossing to enter Poland and the Sławków railway station as a distribution point in the country. The Polish Road Transport Institute explained that coal flows should not face any significant delays despite some border congestion.

PKP LHS (PKP Linie Hutnicza Szerokotorowa sp. Z oo) is PKP’s branch responsible for rail transport on the axis of the 400 kilometres long broad gauge line between the Hrubieszów/Izov border crossing and Sławków. The freight-dedicated line is mainly used for coal or iron ore transportation, thus validating the transit choice through this route.

Congestion should be fine

Rail links between Ukraine and Poland are currently focusing primarily on grain transportation, which occupies most of the border crossings’ capacity. Congestion due to consolidated volumes waiting to be moved across the border is one of the main issues for companies involved in this project. A few days ago, it resulted in a short traffic stoppage by Ukrainian Railways to free up some capacity and allow trains to run more smoothly.

However, the fact that large coal volumes are also on the move between the two countries should not be a problem. That is so because, firstly, coal trains using the dedicated LHS line have fixed track capacity and do not need to use extra via other routes. Secondly, for the time being, coal transport will focus only on these 100,000 tons that need to be transported, meaning that the project has a short-term length and will continue for many months.

In any case, it is unlikely that coal transport would ever be prioritised over grain transport. This could only be the case if things took a wrong turn in terms of the energy crisis and larger coal volumes were immediately needed in Poland, said the Polish Road Transport Institute.

PKP LHS might be working on coal transport between Poland-Ukraine; however, it’s not the only one in the country dealing with this cargo type. PKP Cargo also focuses on coal flows but mainly between ports and the Polish hinterland.

The Polish Road Transport Institute mentioned that currently, PKP Cargo puts all of its efforts into facilitating coal transport by rail between sea hubs and mainland destinations and does not undertake any other type of projects like intermodal transportation. This does not come as a surprise, though, since the Polish Prime Minister had promised that PKP would prioritise coal transport over everything else to fuel the energy production plants of major companies.