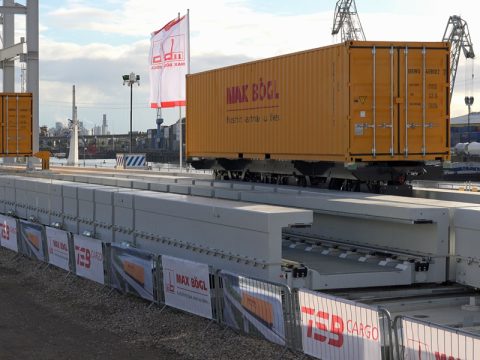 Maglev freight trains: ‘it will work, but it won’t be easy’

The realisation of maglev freight trains is possible, but it won’t be easy. This was said by the International Maglev Board (IMB). The board underlines the importance of experiments such as the recent pilot in the port of Taranto to bring out new ideas and solutions. Johannes Kluehspies, president of the IMB said: “They will find a solution, it will work, then we compare the results to existing systems and the results will tell who will be the winner.”

RailFreight.com interviewed three board members of the IMB to have a better understanding of the feasibility of building maglev freight trains. Together with Kluehspies, Roland Kircher, Vice-President of the IMB, and Eckert Fritz, treasurer of the IMB participated in the interview.

According to them, the main issues with applying maglev technology on freight trains are the weight, much higher than passenger trains, as well as the infrastructure system. Maglev trains, in fact, would require a different rail network than traditional trains, which means that maglev tracks would need to be built from scratch. Albeit not impossible, it is clear that such a transition would require a significant amount of time and a massive deployment of funds.

One of the first experiments with maglev technology to move containers was carried out in 2006 in the ports of Los Angeles and Long Beach by Husam Gurol, who is also a professional of the IMB. As Kluehspies explained, Gurol recently started working again on this project. In this case, maglev technology has been applied to accelerate the process of moving the containers from the port to the hinterland.

Another test to apply maglev technology to rail freight was carried out in Hamburg at the ITS World Congress in Hamburg in October 2021. Max Bögl, a multinational construction company based in Germany, installed a test track in the port of Hamburg.

As Kluehspies explained: “this system tried to give the impression that is feasible to transport cargo containers on a maglev track”. However, there are some doubts concerning the high logistics requirements and the amount of energy required to move heavy loads with this technology.

“Another issue in terms of containers are time slots: how many containers could you move from one place to another in what time,” Fritz pointed out, adding that “you need a lot of parallel tracks and parallel devices for the system to reach the same amount of containers in the same amount of time”. In other words, the current maglev technology is still not significantly advantageous in terms of saving energy and time.

What does the future hold for maglev freight trains?

“All these systems are engineered for people transport, not for heavy freight transport”, said Fritz. This is especially true when considering maglev trains that use electrodynamic suspension (EDS). This system has never been considered for freight trains because the trains would still require to travel on wheels until they are fast enough to levitate and in the braking process.

Kircher pointed out that this process would be advantageous when taking into account energy efficiency. If considered for rail freight, this system is also not advantageous when it comes to a greener transportation system. This is because the train would still generate pollution while travelling on wheels, namely the generation of particles due to the friction on the tracks.

On the other hand, maglev technology that uses electromagnetic suspension (EMS), does not generate any pollution, and does not cause the wearing out of the infrastructure thanks to contactless power transmission. All the interviewees agreed that there are two main issues in the application of EMS technology for freight trains.

First of all, the system can’t levitate if the train is too heavy, which could likely be the case for freight convoys that are heavier than passenger trains. In addition, Dr. Kircher commented that this technology is more advantageous for remarkably high speeds, which, for the moment, are not applicable for freight trains.

The interviewees concluded by suggesting that the transportation of heavier cargo with maglev technology would likely require different engineering efforts, probably a completely changed system. However, they all underlined the importance of experiments such as the one in the port of Taranto since they will provide further research and data.

These experiments can lead to new improvements and, perhaps, a different application of maglev technology to make maglev rail freight possible. One final remark is that it may be easier to implement maglev technology, for example for intraport operations, rather than focussing on a total rail freight transition.

The International Maglev Board

The International Maglev Board was founded in 1997 by Karl-Hartmut Blesik, who passed away in 2006, and Johannes Kluehspies. Its headquarters are in Munich. “The IMB welcomes scientists from all fields who can offer their expertise in helping and promoting the maglev technology when deemed meaningful. The association is non-profit”, highlighted Kluehspies.

1 comment op “Maglev freight trains: ‘it will work, but it won’t be easy’”

Sound, sustainable funding is lacking, all over…, but for on road tuck transports.
Regrettably, advantage of the Old Railway – experience – decisively is sacrified, in favour of some parts – an unholy alliance, including fiscally creative – and share owners of road trucks producing…
A safely calculable, an in x-, y- and z direction, a soundly stabile railway infrastructure, now is needed! “Squats”, “studs” and cracks, at railhead and wheel…, is not acceptable! It is 2022 now!