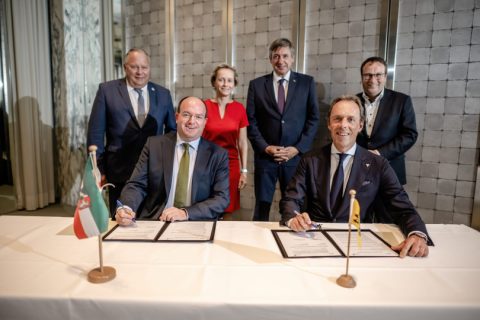 The port of Antwerp-Bruges and duisport sealed a significant partnership to boost their inland and rail connections. The partnership’s particulars foresee intense cooperation between the two ports for hydrogen distribution. The two partners want to establish a ‘rolling pipeline’ where rail will be the dedicated mode to transport the green fuel.

Both duisport and Port of Antwerp-Bruges want to grow into a central hydrogen hub for Europe and jointly build a hydrogen supply chain. Apart from using typical pipelines, the port companies will also deploy direct and highly frequent rail shuttle connections between them as a short or mid-term solution for hydrogen transportation.

Be it the EU’s green transition strategy, the energy crisis unfolding, the scarcity of fuels from Russia or the European ports’ know-how when it comes to fuel storing and distribution, hydrogen becomes of utmost importance, and its transportation follows the same example.

Just like other types of fuel, hydrogen is typically transported via pipelines. Yet, companies cannot wait for pipelines when new agreements demanding immediate results come into effect or when a fuelless winter is in sight. Of course, duisport and Antwerp-Bruges plan to build hydrogen pipelines linking the two ports’ facilities. Nevertheless, the need to transport hydrogen is pressing, which is why the two partners aim “to build an international supply chain for hydrogen by establishing a high-frequency rail shuttle in addition to planned pipeline connections”.

“The import, transmission and distribution of green molecules need short, mid and long-term solutions. Developing a robust multimodal supply system will be fundamental to making the change happen,” stressed Jacques Vandermeiren, CEO of the Belgian port. “Against the background of the current global challenges, it is only logical that we sustainably strengthen our European partner network and cooperate even more closely,” stated duisport CEO Markus Bangen.

A few days after the two ports centralised rail in their hydrogen supply chain plans came DB Cargo to confirm that rail will indeed function as a rolling pipeline. On 11 September, a couple of days after Antwerp-Bruges and duisport signed the agreement, the German railway carrier announced that it aims to utilise its rail network to distribute hydrogen arriving at German ports to the country’s hinterland.

However, hydrogen from Belgium will not need to tranship from vessels to trains as it will follow a fully sustainable and green route. European rail freight seems to be acquiring a new role, and given the right investments, it could alleviate the continent’s fuel shortage and pave the way for the future’s fuel transport.