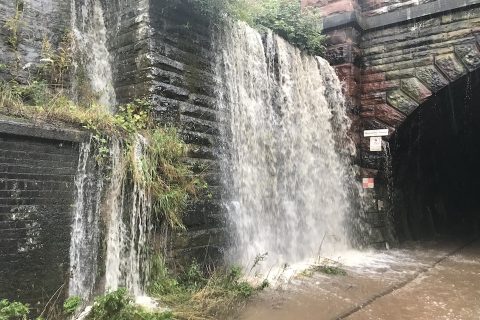 Torrential rain brought trains to a standstill in Scotland on Thursday, and submerged at least one main line, cutting of a large swath of the country. Weather wise, most of Britain had a day to forget on Thursday, even if it was a day most Britons will remember for a long time to come. It seems the deepest gloom was over Scotland, where the weather was bad enough to prompt a severe warning from the Metrological Office.

Only a matter of one month ago, Scotland was experiencing a record heatwave. Since then, normal service has been resumed and Thursday brought the country to a standstill amid widespread flooding and disrupted rails service. Passengers and freight train were stranded, cancelled, delayed and diverted as the heavens opened and did their best to redress the shortfall in Scotland’s reservoirs.

Gateway to the Highlands … closed

The city of Perth was washed out of the British rail network on Thursday, as the region took the worst of the weather event. The normally spectacular Perthshire and Tayside countryside was augmented by at least on additional natural wonder, in the shape of a brand new waterfall. Unfortunately the waterfall was at the mouth of Moncrieffe Tunnel and washed away the main line between Perth and Stirling, at a point just a few miles north of the brand new Blackford freight terminal, opened just last week to serve, ironically, the mineral water bottling plant of Highland Spring.

“Our teams are continuing to clear the flood waters on a number of routes into Perth”, said Network Rail in Scotland. Later in the day there was good and bad news. “We’ve been able to open the Ladybank to Hilton Junction (near Perth) line. However, the line north from Hilton Junction into Perth station remains closed.”

No boxes for Inverness?

The line washed away at Moncrieffe Tunnel is on the northern edge of Hilton Junction. This carries both routes south from Perth – to Glasgow and Edinburgh, effectively severing access to the West and East Coast Main Lines. Although it is likely that improving weather will allow traffic to move by Friday, it may be difficult to complete the return intermodal trip from Inverness. The northbound working carries a huge volume of consumer goods and perishable foodstuffs, commonly known as the “Tesco Train”, because of the large number of containers carried for the supermarket chain’s branches in the north of Scotland.

The infrastructure agency, Network Rail issued images of the flooding at the rural location of Greenside, near Ladybank, on the line connecting Perth with Edinburgh. Most illustrative through was the deceptively calm image of the water at Glasgow Road, where it crosses over the railway in Perth, just north of the station. “The water level here is 7-10cm above the top of the rails”, said Network Rail. “For context, we have to stop trains when flood water hits the top of the rail.”

That flooding severed the Highland Main Line, and left just one route from Perth. There is a spur which diverges from within the station to cross the River Tay – which is tidal at this point and supports an inland dock. The line follows the river’s north bank to Dundee, 25 miles (40km) to the east. However, further flooding on the line between Dundee and Aberdeen also caused periods of closure by that route.

Historically, Perth has been prone to flooding for centuries. Part of the city’s attraction are the wide parklands along the River Tay, which are natural flood plains. Much of the city’s freight handling capacity has been closed over the years, most notably the large marshalling yards on the north edge of the city, and access to the docks, despite their proximity to the line.