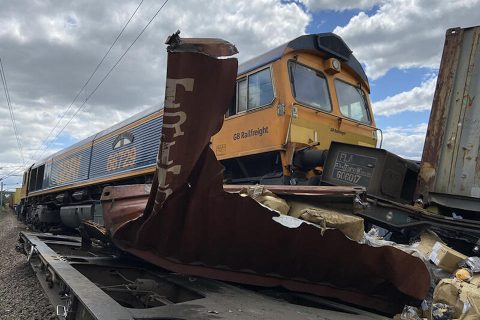 A signal passed at danger is always a serious matter, and the Rail Accident Investigation Branch is treating an incident earlier this month at Doncaster in just such terms. Two freight trains became rather more dynamically coupled than would be desired on the morning of 7 July, damaging one locomotive, several intermodal wagons, and infrastructure at the site near Loversall Carr, a complex junction connecting the East Coast Main Line with freight lines, the nearby iPort rail terminal and mixed traffic lines to Gainsborough and several east coast ports.

The non-fatal collision between two freight trains earlier this month at Doncaster proved more embarrassing than life-threatening, but there was the potential for significant service disruption. As standard procedure, the independent safety watchdog Rail Accident Investigation Branch (RAIB) has taken a close interest and will produce a report with any recommendations.

The government-appointed but independent RAIB began investigating the crash between two freight trains on 7 July 2022.

The RAIB say that the train passing the danger signal ran into the back of an already stopped service. “At around 06:23, train reporting number 4E11, a freight service operated by GB Railfreight, collided with the rear of a stationary freight train. The collision occurred to the south of Doncaster on the [slow lines], between Loversall Carr and Flyover West junctions”, says their initial statement.

No injuries despite the speed of collision

Immediately before the accident, the northbound intermodal train designated 4E11 passed a red signal. “The rear of the stationary train was approximately 230 metres beyond this signal when the collision occurred”, says the RAIB. “[The] train was travelling from Felixstowe to Masborough and consisted of 35 container-carrying wagons and a locomotive. It collided with the rear of the stationary train at approximately 28 miles per hour [45 kph].”

No one was hurt in the accident, although the collision derailed several wagons in both trains and caused significant damage to the vehicles and infrastructure involved. “Our investigation will seek to identify the sequence of events which led to this incident”, says the RAIB. “It will also consider the way in which the train was driven [and] any factors which may have influenced the actions of the driver of the train.”

The RAIB says it will also look closely at the condition of the signalling system at the time of the incident and seek to understand any underlying management factors. Both of those actions are standard practices for the watchdog.

Masborough, the eventual destination of the train, is the main terminal for Rotherham in South Yorkshire. It was, until the 1980s, the site of the city’s main passenger terminal, which has since been superseded as part of a broader tram-based metro system centred on neighbouring Sheffield. Doncaster has been shortlisted as a potential headquarters for the new infrastructure and rail management agency Great Britsh Railways.

The moving locomotive involved, a standard class 66 diesel numbered 66729, was named “Derby County” by GBRf, and featured as a popular model on the British ’N’ Gauge scale. Unlike its 148 times larger big brother, it has been discontinued.