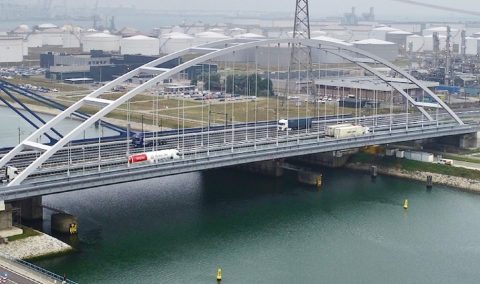 Bridge in port of Rotterdam to reopen double track, but not in strong wind

It is again possible to travel with two trains at the same time over the Suurhoff Bridge to the Maasvlakte. Trains can now safely cross the bridge, even with winds up to 44 km/h (wind force 6). Since 2 June, the bridge was only accessible on a single track, because ProRail, the Dutch infrastructure manager, found that there was corrosion. As a result, the bridge no longer met the safety standards when two freight trains passed over it.

Despite the reopening of the bridge, loaded ore and coal trains are no longer allowed to use the bridge when the winds exceeds wind force 6. For other trains, the bridge will be open again in single-track in case of wind force 7 or higher.

“We once again critically looked at the situation and came to the conclusion that it is possible under certain conditions to allow several freight trains to cross the bridge at the same time. Factors that we have to take into account are wind and the load on the train. This has been agreed in consultation with carriers and departments within ProRail,” said a spokesperson.

ProRail also states that it has not yet found a definitive solution for the problems at the bridge. “In the meantime, we are busy working on an action plan to see how we can make full use of the Suurhoff Bridge again,” the spokesperson said.

Arno van Deursen, country manager of Lineas NL & Region North, and general manager of Independent Rail Partner, says that capacity has been severely limited. “As a result of this situation, we have certainly suffered a loss of turnover of more than 100,000 euros. We run about 100 trains a week. At least fifteen of these have to go to the Maasvlakte every day. Trains sometimes had to wait up to four hours before being assigned a path. And those trains then also had to be set up again at a yard, so that they also filled up quickly.’

‘Without the Suurhoff Bridge, the Maasvlakte cannot be reached by rail. The rail freight operators find it incomprehensible that the umpteenth challenge from ProRail is now appearing like a devil from a box,” says Hans-Willem Vroon, director of interest group RailGood, about the situation. He says about the current restrictions on relief: “If the wind isn’t blowing too hard, this is definitely relief. But this is of course not very nice for the carriers who run heavy trains’.

“When the wind blows hard, we again suffer from the same restrictions. And we don’t know when the bridge will be repaired. In addition, it will likely require decommissioning to restore the bridge, which may not allow trains to run over it at all. We will have a lot of trouble with that,” says Van Deursen.

As a result of shortcomings identified by the Dutch Directorate-General for Public Works and Water and Management in the road section of the bridge, ProRail conducted an investigation into the rail section last month. This showed that the rail section did not have the same restrictions as the road section, but there was corrosion. “Follow-up research has now shown that the legal standards for the load on the bridge are exceeded if two fully loaded freight trains travel across the bridge at the same time. This is the result of the corrosion and the slender design of the bridge. In the coming weeks, we will investigate how the bridge can be reinforced,” said ProRail about the situation at the time.

This article was originally authored by Simone van der Lee and published in our sister publication NT.nl.