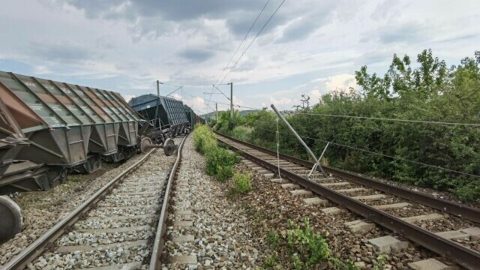 A train operated by the Ukrainian Railways derailed in the Iasi prefecture in Romania. The train had just unloaded grain at the Constanta port and was on its way back to Ukraine. The incident took place on 30 June at 5 am, with 11 out of 32 wagons getting off the track. However, the wagons were empty, and no casualties occurred.

According to various Romanian media, the accident caused some traffic nuisance, though. The tracks were blocked for four hours, delaying freight and passenger services. Even after reopening, traffic was possible only on one of the two lines, while opening the second line could take days, said Romanian officials.

The accident could also cause some nuisance to the rail freight exports between Ukraine and Romania. The two countries have different track gauges, and the change between lines already takes much time. The four-hour track closure and the respective operation only with one line could mean that rail freight capacity between the two countries could decrease during the coming days.

Heat could be the cause

Romanian authorities are carrying out an investigation to identify the accident’s cause which is still unknown. However, eyewitnesses explained that heat could be the cause behind the derailment. Heat during the summer months can dilate the tracks and lead to derailments.

Tracks need substantial maintenance throughout the year to withstand higher or lower than usual temperatures. At the same time, if their usage suddenly spikes, like in Romania’s case, such problems can become more frequent.

Not only in Ukraine, but in Sweden – at priority lines…- just recently, derailments have occurred. (Even worse, here authorities, so far, seem not to have have a clue, why…) This is not sustainable!
For sake of railways, of clients, of tax payers, of all, a timely, an upgraded, high quality “Old Railway”, now urgently has to be constructed for!