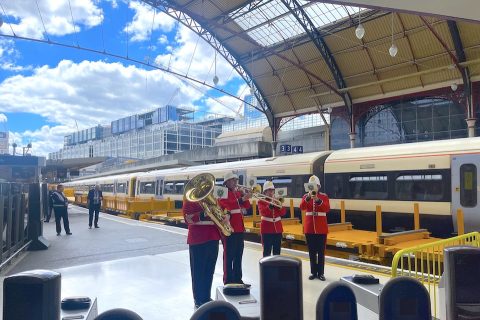 A rake of pristine modular wagons, so box fresh they almost have the wrapping paper still on them, and a locomotive so strikingly liveried that one feared to touch the almost dry paint. All that presented to 100 high-profile industry guests on the most famous international platform at a historically listed station in central London. If Wascosa sought to keep quiet their charge into the UK market with the fulfilment of a massive order, then they certainly went about it in a novel way.

Swiss precision, coupled with British pomp and circumstance, and sprinkled with a touch of continental joie de vivre, combined to make the Wascosa Rollout UK a formally informal event, earlier this week at Victoria Station, on the very platform commissioned for the luxurious boat trains that used to cross the Channel in the decades before the tunnel. The orange and yellow colours of the distinctive Lucerne-based leasing company rolled into the station with all the self-importance of a latter day Golden Arrow, bringing continental sophistication to the heart of the British capital, and announcing the entry of Wascosa into the British market in a suitably circumstantial way.

Maximum use of assets

If the royalty of the railways were to announce a regal pack between themselves, then doing so at a station named for an empress, and in the lea of her palace, could not have been a more appropriate venue. Wascosa, who occupy the throne in terms of continental freight leasing, have concluded an alliance with the young prince of operators in the United Kingdom, GB Railfreight, to provide and maintain a modern fleet of modular wagons to Network Rail, the loyal servants of the British infrastructure. The ceremony marked the beginning of delivery of a fleet of 570 units to modernise the NR fleet and cement Wascosa’s presence in the UK.

Hauled in by “Wascosa”, a newly named class 66 locomotive of GB Railfreight, resplendent in a livery representing the lessor and the lessee, came a royal family rake of Wascosa ‘flex freight system’ modular wagons. Fitted out for the occasion, the wagons arrived in a variety of the combinations that all parties believe will help make maximum use of the assets with minimal downtime. The demonstration here was for the benefit of infrastructure support functions, but both Wascosa and GB Railfreight were eager to acknowledge the potential for commercial customers, and the adaptability of the rolling stock for conventional loads, carrying everything from boxes to bulks.

“The UK market is interesting for us because we see a lot of renewal activities in the market”, said Peter Balzer, the chief executive of Wascosa. “The market is specialised, you have to know more than in other markets. We want to bring the new innovative solutions we have to the UK. “We are totally convinced that we have good solutions for the UK market and what is promising for me was that when we spoke five years ago with many potential customers they all asked us to come to the UK and increase competition and bring your innovations to the UK.”

For John Smith, the managing director of GB Railfreight – the superstructure and maintenance partner in the venture – the deal and the rollout of the wagons represents the culmination of talks that have taken him from London to Lucerne and back. “We met Wascosa about three years ago they were interested in getting to the UK market, to finance equipment here”, he said. “We were very interested in getting a new lessor to finance some of our equipment. We worked on a number of opportunities. We were buying new equipment and leasing it from various lessors, but in the end it crystallised into this deal with Network Rail, where Wascosa financed the wagons and we financed the equipment that goes into maintaining it.”

Network Rail will be the immediate beneficiary of the deal. The infrastructure agency gains a modern and highly-adaptable fleet, and the backing of an ambitious UK-based operator with plenty of experience in the field. “We are looking to expand into other areas”, said John Smith. “We are obviously generating cash and obviously profitable, so we can invest in equipment which is no bad thing if people like Network Rail need new equipment, but we are looking to expand the boundaries of what we do. We are operating Network Rail’s test track at Melton Mowbray for instance. Hopefully the British rail freight market will grow, but there was a time when we were slightly worried about that. That is no longer the case, and the market is growing like ‘topsy’ at the moment, but prior to that we were looking at the business to diversify and see where we could grow.”

There is ambition too from Wascosa, as befits a family run company gearing up for its own diamond jubilee in 2024. Yet, he remains crystal clear that there is plenty still to understand. “We want to grow but not at any price”, says Peter Balzer, who is as sprightly as his 58-year old company. “We want to improve [the size of the company] and there are lovely new car types which we know we can transfer to the UK market and develop the European market. We are willing to learn to understand and also to transfer the good things on both sides.”

As might be expected in matters concerning the Swiss, financial details of the deal were not discussed, nor was the bill for hiring Victoria Station. All images: Shan Liu at Almond Bank Communications.