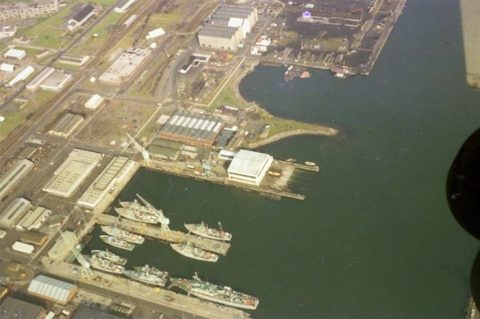 Proposals to reconnect a Scottish port with freight ferry services to Europe could hinge on making rail freight part of the mix. That’s the message from stakeholders seeking to establish a direct link between Rosyth on the east coast of Scotland and Zeebrugge on the west coast of Belgium. The ferry service has not run since 2018.

Connecting Scotland with one of the top ten biggest ports in Europe has caught the imagination of Scottish manufacturers and rail freight operators. An agreement between a recently established Scottish maritime management company and international ferry operator DFDS has raised hopes that the time has come for this service. Attempts twice in the past have failed, but backers are hoping for a third time lucky.

Congestion at ports further down the east coast of Britain has already encouraged rail freight development in places like Immingham and Teesside. Further north, the estuary of the River Forth has been slowly coming back into fashion as a destination for freight traffic. Forth Ports Authority, the operating company, has been expanding operations – primarily at its Grangemouth facility, where the company completed extensive upgrading last year.

However, Forth Ports has two major holdings further downstream, both of which have moribund rail freight facilities. The company operates the docks around Leith, which serves Edinburgh, and manages the Rosyth terminal. The extensive layout at Leith featured in RailFreight Live last year. Now Rosyth is back in the headlines with experienced backers.

Rail freight has been touted as a game changer in the Rosyth mix this time around. DFDS, the ferry company previously involved in operating passenger and freight services out of Rosyth, has partnered with Glasgow-based Ptarmigan Shipping to resurrect the connection. “We are always looking for opportunities to grow our network”, said a DFDS Statement. “[We] can confirm that we are investigating the possibility of a new ferry route between Rosyth and Zeebrugge.”

Efforts in the past have floundered on the convenience of road transport to ports further south and availability at terminals like Felixstowe and London Gateway. However, the rising costs of road transport (and the well-publicised driver shortage) is a much more significant factor now. Couple that with busier ports, the zero-carbon political agenda, and the rusty rails at Rosyth look much more attractive. The port is also running to become a Scottish Greenport, offering significant economic advantages.

Better known as a naval base, Rosyth has been developing as a civilian facility for several years. The advantage of the site lies in its own rail branch line, which was last used regularly for scheduled passenger services in 1988, carrying authorised personnel into the naval base. The line remains in-situ but will require significant upgrading to bring it back into service.

If the Rosyth project was to reach fruition, it would be the second or third recent development proposed in the Fife region of Scotland. The Levenmouth line is already being rebuilt, a five-mile (8km) long branch reconnecting communities and potential freight customers in the east of the county. There are also hopes that the line serving the site of the former coal-fired power station at Longannet in the neighbouring county will be revived if plans for a rolling stock manufacturing plant are realised on that site.

Rail ferries, upgraded with port to port trains of “mafis”…, should be, the by far quickest turn around device, thus the timely, the robust device for connecting Scotland and England with Continent.