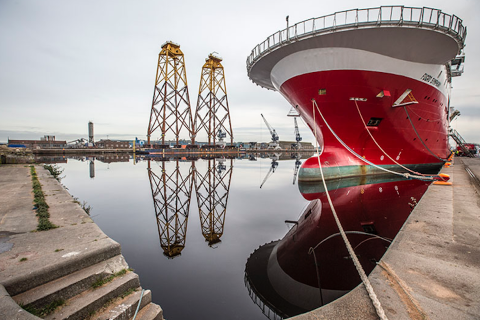 The governments in Scotland and England have reached agreement over the implementation of the London-led freeport initiative. The devolved government in Scotland had held back, favouring a different formula for economic regeneration. This week however, coinciding with a prime-ministerial visit by Boris Johnson to Scotland, a compromise has been reached which will see a revised specification incorporating both models. Scotland will also be allocated two ‘green freeport’ locations instead of just one. That could be good news for the rail freight sector.

The concept of the freeport, already established in England, has been coming down the tracks for the devolved nations of the UK for over a year. The Scottish government in Edinburgh sought to make the model more environmentally and socially responsible, under their model of ‘greenport’. After a year of negotiations, the compromise – with the working title of Green Freeports – will see much of those additional elements considered. The additional environmental clauses will likely have positive implications for Scottish rail freight prospects.

Business commentators have expressed concerns hat the delay, caused by the protracted discussions between Scotland and England. Ever since devolution in the late 1990s, and even more so since Brexit, the Scottish government has defended its economic autonomy from London. When the UK government announced their freeport plans, Scotland’s government had reservations about the business model, and called for the freeports to concentrate more on environmental sustainability and social responsibility. There were concerns that the freeports could become centres of low-wage manufacturing, rather than the value-added innovation centres hoped for.

Almost all of the eight freeports in England, announced by the government in March last year, are rail connected. Rail freight will play a leading role in seven. The outlier, East Midlands Airport, has the potential for a direct connection from the nearby East Midlands Gateway. The worry for supporters of the scheme is that the year-long head-start has given English freeports too much of a lead. That aside, there is still division in the Scottish ranks, with the Green party, who are in coalition with the Scottish National Party, reportedly calling the whole freeport concept a licence to launder money.

The case for Edinburgh

Irrespective of the political challenges, some Scottish business has already embraced the freeport scheme. The most prominent example is Edinburgh based Forth Ports, which has a huge stake in the Thames Freeport. The east of London site embraces their property at Tilbury and the adjacent DP World London Gateway. Forth Ports headquarters sits on the edge of Leith, the maritime district of Edinburgh. The docks are still served by the largely moribund remnants of the vast rail system that once dominated the shoreline for five miles (8km). A bid from there could well be expected.

Edinburgh could hardly be called Scotland’s region in most need of economic regeneration. However, if building on success remains a significant criteria, then the Scottish capital could be in the running. It may be no coincidence that Monday’s prime ministerial visit by Boris Johnson took in Rosyth, within sight of Edinburgh, where a moribund branch line still sits in the overgrowth, awaiting resurrection.

Also using from the rust is the self-styled oil capital, Aberdeen. The port authorities there have already made public plans for extensive rail-supported development. With the city transitioning from the black stuff of North Sea Oil to a centre for the green stuff of renewable energy, there is a good case to be made and the relatively long communications routes lend themselves to rail transportation. If a bid were to be successful from Dundee or the River Tay in general (docks exist as far upstream as Perth, 25 miles – 40 km inland) that would represent virtually a clean slate for rail freight. Dundee did have extensive railway infrastructure, but the modern layout leaves only modest scope for industrial exploitation. However, brown field remediation has left a large part of the waterfront available for development.

A freeport may be the salvation of Prestwick Airport. The Scottish state-owned terminal already is more successful as an air cargo operation. Attempts to revive its passenger status have met with little success. However, with the tracks of the Glasgow – Ayr – Stranraer line adjoining the perimeter, and an inland link ultimately to the West Coast Main Line, establishing a freeport could solve a huge political and economic headache, and kickstart a regional regeneration. Local stakeholders will be noting the accord between London and Edinburgh with interest.

Clyde Estuary on the crest of a wave

The rest of the Clyde Estuary all has a good case for consideration. A number of small ports are rail served, and from Gourock into Glasgow (25 miles – 40 km) a line exists that carries a frequent passenger service. The entire riverside has suffered from the demise of shipbuilding and heavy industry.

The famous ‘tunnel over a tunnel’ port line in Greenock still exists. A branch to the modern day container terminal crosses over the east-west main line where both lines are in tunnels under the centre of the town. It was briefly used until 1991, but gauge clearance is too low to permit modern shipping containers to pass. Proposals to rebore the tunnel are considered as likely as renaming the town to Freenock, should its trading status change.