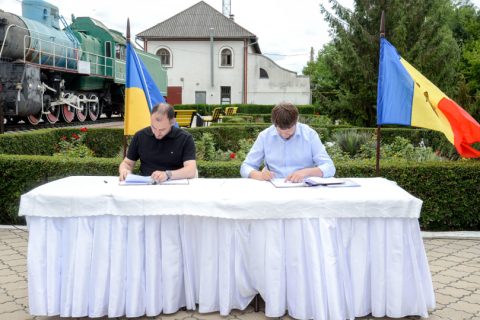 The Infrastructure Ministries of Moldova and Ukraine signed an MoU to develop railway connections between the two countries. In this context, the two countries will reopen the Berezino-Basarabeasca rail link, which has been in disuse for 25 years.

The agreement between the two governments targets facilitating Ukrainian imports/exports. As the Moldovan Ministry of infrastructure underlined, with the line’s reconstruction, Moldova will acquire direct access to the Ukrainian port of Izmail on the Danube and alleviate the heavily congested river port of Reni located which is nearby. Additionally, with the Berezino-Basarabeasca rail line, Ukraine will be able to export its products via rail directly to Moldova and other EU countries.

Old line comes back to life

“The Berezino-Basarabeasca railway section, on the territory of Ukraine, was opened in 1997”, informed Moldova’s Ministry of Infrastructure. However, it has not been used for 25 years, so it needs some refurbishment. In total, the line is 23 kilometres long, while Moldova’s part covers a distance of just 1,2 kilometres. Understandably, most reconstruction will need to take place on Ukrainian territory.

The bordering region between Moldova, Ukraine, and Romania might not be one easily spotted on the maps. Things might get even more blurred when it comes to its economic and logistical significance. However, the region acquired much importance after the war in Ukraine occurred due to the need for Ukrainian exports and the freight flows arriving there all the way from Asia.

Nevertheless, the Moldovan Ministry of Infrastructure claims that reopening the Berezino-Basarabeasca rail line will bring new life into the whole region, which is already considered an important logistics hub. “Bessarabia, where the port of Izmail is, is an international logistics hub, which will ensure the connection of the ports of Yushniy, Odessa, Chernomorsk, Belgorod-Dnestrovskii, Izmail, Reni, Giurgiulesti, Galati, Braila and Constanta. In this way, the port complexes will become more competitive, and the beneficiaries of the port services will have a more diversified offer”.