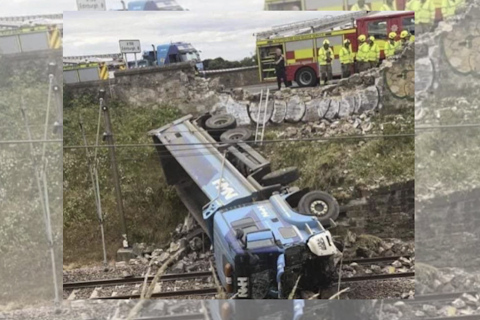 On any other day this was a horror crash waiting to happen, with a huge potential loss of life. Instead, on Thursday (23 June) it was just a dramatic incident that caught the attention of the nation. An out of control heavy truck left the road just a few miles outside Edinburgh, demolished a stone retaining wall, and plunged onto the tracks of the East Coast Main Line. Mercifully, the usually busy line was almost deserted, an unexpectedly fortunate side effect of the current industrial disputes in the UK.

Police Scotland were called to an incident at 1330 on Thursday, 23 June. Officers were astonished to find a heavy truck, crashed on to the normally busy tracks of the East Coast Main Line. While thanking their luck, those with any interest in rail operations were doing more than thanking providence. To them, the incident is chillingly similar to a crash twenty-one years ago that caused nearly one hundred casualties, on this very same route.

In the morning of 28 February 2001, a Land Rover and trailer crashed down an embankment near Selby in Yorkshire. The Land Rover driver was sleep deprived at the time. His vehicle was struck seconds later by a southbound express passenger train. The derailed express was then hit by a northbound freight train, killing both train drivers. Eight passengers were killed by the crash, and a further 82 were injured. The tragedy is commemorated by a memorial in the village for which the accident was subsequently named – Great Heck.

Thankfully, Wallyford will not be added to that cannon of British railway disasters. The East Coast Main Line, on the stretch between Edinburgh and the border with England might normally be expected to see a heavy freight, intermodal, suburban, regional or express passenger workings every few minutes. On Thursday, the combined effects of a ScotRail driver shortage and the industrial action by members of the RMT trades union combined to make the line almost deserted, thereby greatly reducing the possibility of a collision.

Network Rail in Scotland posted on their social media within minutes of the incident. “We’re responding to a report of a road vehicle on the railway at Wallyford”, said their Twitter feed. “We’re working closely with the emergency services and will provide more info soon. Services on the East Coast Main Line are being disrupted.” Network Rail tagged the operators with services running, noting long-distance operators LNER, TransPennine Express, and CrossCountry Trains. The ‘open access’ operator Lumo was also mentioned. Freight operator DB Cargo UK was also tagged.

The crash was believed to have done relativity little damage to the permanent way. Network Rail tweeted to that effect. “Due to the vehicle being in close proximity to the overhead lines, we’ve had to turn off the electricity supply which will affect trains running to/from Edinburgh Waverley”, they said. “We’re working with the emergency services to find the best way to recover the HGV [heavy goods vehicle]. Once that’s done, we’ll then need to check for damage to the track and overhead line.”

However, the damage to infrastructure and the recovery of the crashed vehicle has proved more difficult to resolve than had been hoped. “Following an incident involving a road vehicle on Thursday 23 June, we will not be able to run services between Newcastle and Edinburgh in either direction on Friday 24 June”, tweeted passenger operator LNER. That suggests the ECML will remain closed despite the railways returning to full operations after the strike on Thursday.

However, Saturday will see the third day of strike action across the railway in Scotland, England adn Wales. Whether that will impact on the vehicle recovery and repair of the crash site remains to be seen. While it is in some ways fortunate that the accident happened on a day of industrial action, it may be that the disruption to the East Coast Main Line takes rather longer to resolve as a result. The truck driver survived and has been hospitalised.