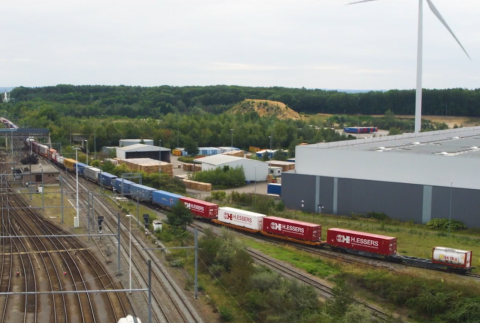 A high-speed line from Bulgaria to Istanbul, also for freight

Turkey has come one step closer to having a high-speed railway link from Istanbul to the border with Bulgaria. The Halkalı – Kapikule project, which is scheduled to be completed this year, saw the first welding procedure carried out last week, celebrated with a true welding ceremony.

Welding ceremonies are held in Turkey to laud in a new phase on a major construction project, and the country is obviously pleased with the next step of this railway line. And not without reason; the 229-kilometer route between Halkali and Kapikule will reduce the journey to the Bulgarian border to 3,5 hours, and it is not just a high-speed line for passengers. Freight will benefit too.

Part of the Silk Road

There are various reasons why this railway line is considered to be a special project. First, it is part of the New Silk Road, where Turkey sees its growing role as a transit country. Now that transit of Eurasian traffic through Russia has decreased, there is a growing interest in the Middle Corridor, and Turkey is one of the gateways to Europe on this corridor.

“Turkey is on the way to becoming a global logistics superpower”, said the Turkish Transport and Infrastructure Minister Adil Karaismailoglu at the welding ceremony. “Turkey is at a crossroads that brings together the world’s raw material resources and economic centers. This means that the transit transportation between Asia and Europe is carried out through our country’s transportation networks with a sustainable, uninterrupted, and increasing capacity,” the minister was quoted as saying by Azer news.

It is however not a mere Turkish project. Europe is equally interested in the railway line. As such, the EU and Turkey have agreed on an investment plan. The section from Kapikule project near the Bulgarian border to Cerkezkoy is funded by the EU with a 25 million grant. The section Cerkezkoy – Halkalı that connects to the city of Istanbul is financed by the Turkish government and costs 278 million.

The railway line will enable the movement of trains at a speed of 200 kmph. Unlike most high-speed projects, which are limited to passenger movement, this railway line is there to boost rail freight traffic just as much. The government has indicated the ambition to increase the modal split of rail from the current five to 22 per cent in 2053.

Although it yet remains to be seen whether these projections come true, and whether they come true on time, the very fact that Turkey invests this heavily in the modernisation of its railway network is worth emphasising. With this, it connects to the TEN-T network through Bulgaria, and it underlines the importance of rail over other transport modes.

The railway line is not entirely new, but was for a large part unused. The construction works are an upgrade of the existing infrastructure, which will eventually result in a fully electrified line. The railway line that is currently used to connect to Bulgaria is similar up till Çerkezköy. The new line diverts south of the O-3 motorway and parallels it until Edirne. From Edirne onwards, it follows the same corridor as Pehlivanköy–Svilengrad until Kapıkule.

1 comment op “A high-speed line from Bulgaria to Istanbul, also for freight”

Multi purpose rail way infrastructure, at upgrading of existing, yes, but…
(For sake of being timely, for proving robust, “French concept” has got advantages.)
Currently, at a time, when customers, ware owners have shifted strategy to “On Demand”, now severe “bottleneck”, for cargo railways in particular, is looming capacity offered at tracks. Quality (On Time) pays, at infrastructure, now more than ever!