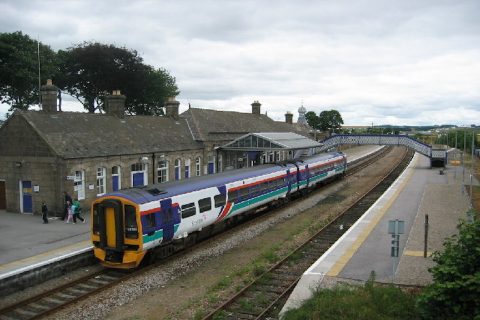 Scotland’s North East – is there a chance for a new modal shift?

The Scottish government agency, Transport Scotland, is halfway through a public review of its plans for travel and communications connections between Aberdeen and Inverness. The two principle settlements in the north of Scotland are separated by 100 miles (160km) of outdated road and rail routes. Options favour a vastly upgraded highway, but modal shift to rail freight and the climate change agenda could still swing the balance in favour of rail.

Notoriously unfit for purpose, the links between Aberdeen and Inverness have been a thorn in the side of Scotland’s rich but economically underperforming North East. Plans have long been in place to upgrade the main A96 highway, but the rail network remains underinvested, despite a series of upgrades. However, public opinion is swinging away from road development, and a new consultation will give businesses and residents an opportunity to turn the tide.

Although it is still habitually referred to as the A96 Corridor, the routes between the oil and renewable energy hub of Aberdeen and the fast-growing ‘Highland Capital’ of Inverness features two almost parallel road and rail connections. Neither route is considered adequate to support economic growth along its length. However, with a severe budget shortfall looming in the Scottish economy, the independence-seeking Scottish National Party and environmentally aware Green Party, who form the coalition government in Edinburgh, have to make stark choices – or rather they’re leaving that to the people of the region.

A somewhat low-key month-long online consultation is nearing its end, seeking views on existing issues along the A96 corridor, and the kind of opportunities that could be realised in the future. Transport Scotland says it is seeking a better understanding of how the A96 corridor is used, particularly given the changes due to the Covid-19 pandemic. Making very little reference to rail potential, the Scottish transport minister Jenny Gilruth said her government remained committed to delivering improvements along the A96 corridor.“The current plan is to fully dual the route between Inverness and Aberdeen. However, we have agreed to conduct a transparent, evidence-based review”, she said.

A double-track railway throughout

Talk of a dual-carriageway road does seem at odds with the Scottish government’s stated aims of modal shift and carbon reduction. The lack of an equally ambitious plan for the railway between Aberdeen and Inverness has left campaigners and supporters bemused. Despite that, Gilruth says they will listen to the opinions of the people and businesses in the region. “This public consultation is an essential part of our review of the A96”, she said. “We want to hear from communities and stakeholders throughout the A96 corridor so that we can take this into account alongside other technical reports when identifying options for improvements on the route. I’d like to encourage people with an interest to take part.”

Network Rail, the Britain-wide infrastructure management agency, would however contest that they have already undertaken a wide-ranging programme of works on the line. There is a plan to further increase both passenger and freight capacity, but the line remains primarily single track with some passing loops. Supporters would like to see that change to a double-track railway throughout, while campaigners continue to lobby for the reinstatement of some of the many connecting lines cut in the rationalisation of the 1960s and 1970s. Principally, the Campaign for North East Rail would like to see the lines to Fraserburgh and Peterhead rebuilt, with long-distance freight playing a leading role. The significant number of intermediate settlements on the line, including (from the Inverness end) Nairn, Forres, Elgin, Fochabers, Keith, Huntly, Inverurie and Kintore, lends themselves to the emerging express logistics market, potentially taking significant numbers of mid-weight, mid-range commercial vehicles off the road.

Reliability and efficiency of the rail corridor

Local politicians want the regional voice to be heard. Nationalist member of the Scottish Parliament Gillian Martin, and her Green Party counterpart Maggie Chapman, have both encouraged residents and businesses to take part in the feedback survey. However, the online survey makes rail conspicuous by its absence, despite freight initiatives such as the recent timber train trials and historical freight capacity along the line.

The Scottish government still says it has commitment to rail development, but has not backed up its striding ambitions with anything like the level of work on the ground needed to fulfil its own aspirations. “Commitments given in relation to the North East of Scotland included work to improve the resilience, reliability and efficiency of the Aberdeen to Inverness rail corridor”, said a government statement. “[That is] alongside our commitment to decarbonise the rail network, to make it more competitive to road and encourage modal shift for both passengers and freight.”

Although very much skewed towards road development, the online consultation runs until 9 June.

1 comment op “Scotland’s North East – is there a chance for a new modal shift?”

Investment within railways (a transport device) has to be for ensuring railways the timely, the high quality transport device. (For environment, for railways and for all, this remains the sustainable.)
For unique advantage, nearness to Ocean ports, rail ways, the on shore large scale on shore port feeding device, now should be top priority, however not defensively, but offensively!
For sake of soundly ensured low track charges, axial load capacity has to be raised to 70.000 pounds, etc., etc.