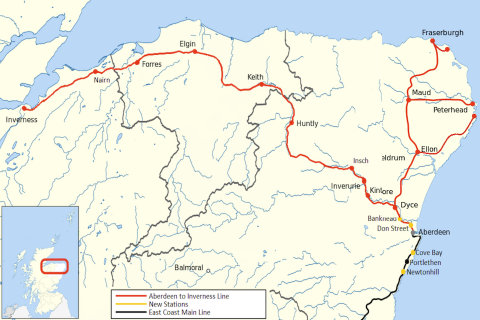 Incorporating freight will make a new route in North East Scotland viable and economically regenerate the region. Rebuilding lines to the coastal communities of Fraserburgh and Peterhead will open up new markets to Aberdeen and beyond. That’s the Campaign for North East Rail plan, which is lobbying for old lines to be reinstated as part of a transport network fit for the twenty-first century.

The coastal towns of Fraserburgh and Peterhead, once the centre of deep-sea fishing in Scotland, could be revived by an ambitious plan to reinstate railways closed since the 1960s. The Campaign for North East Rail (CNER) wants to see freight and passenger services reinstated over the lines, connecting the communities with Aberdeen and the rest of the UK. They say the lines have as much potential as the famed Borders Railway but can add freight to the mix to make them even more viable.

The extensive network of lines that connected the North East of Scotland was slashed back in the rationalisation of the 1960s that lost Britain around half of its route length. Today all that remains is a single trunk route between Aberdeen and Inverness – around 100 miles (160km) in length. The line was, however, recently extensively upgraded by Network Rail. It has served as a valuable diversionary route for freight, especially during the closures brought about by storms and the derailment near Stonehaven just over a year ago.

With restored capacity built in, CNER says the time is right to rebuild further and reconnect Fraserburgh and Peterhead with the national network. They argue that the freight potential for the line would answer climate change questions by reducing both carbon and congestion in and around the city of Aberdeen, Britain’s centre for offshore industries.

Jordan Jack, the co-chair of the CNER, compared the project with the runaway success of the Borders Railway. That line in the south of Scotland serves a similar population and demographic, connecting Edinburgh with Galashiels and Tweedbank. At 35,1 miles (56km), it is almost identical in length to what has been called the ‘Buchan Railway’. Mr Jack’s campaigners say it would have the additional benefit of a ready-made freight market.

“We estimate that in its first year of operation, the route would see over a million passengers”, Jack said. “This, combined with the freight potential in the Buchan area, would allow us to save at least 32,000 tonnes of CO2 equivalent annually.”

Traditionally, fish traffic was the freight mainstay of the line from Peterhead and the branch to neighbouring Fraserburgh. Campaigners expect the freight loading to be more diverse in future, with intermodal playing a part. It is also noted that with the UK facing a chronic shortage of long-distance truck drivers, the opportunities for wagon load and fast freight logistics are wide open.

The Borders Railway does not carry goods at present. Although the route was engineered to accommodate heavy freight traffic, there is insufficient capacity – and no ready market to exploit – unless the line is extended to become a cross-border connection with England. That remains something keenly sought by the lobby group, the Campaign for Borders Rail.

Engineered to take all traffic options

The comparative remoteness of the Buchan Railway can work in its favour, argue campaigners. “The Borders Railway completely transformed communities along its length”, said Jack. “This project can kickstart the regeneration of a corner of the northeast identified as a priority by the Scottish Government and allow us to take a significant stride towards decarbonisation.”

The CNER’s latest study says a railway to Peterhead should be cheaper to build than the Borders Railway, which came with a bill for 350 million pounds in 2015 (nearly 400 million euro). They say there are fewer civil engineering obstacles – such as expensive tunnelling under the Edinburgh City Bypass highway. CNER say the route to Peterhead should be engineered to take all existing freight traffic options. “Raising the gauge to W12 benefits freight services on the line and widens the capability of the existing link to the harbour.”

The campaigners have submitted their proposals to the government in Edinburgh and called on ministers to get behind the project, thereby answering economic, environmental and social imperatives.

With local rules HGV, each driver & tractor could lift 4-5 trailers/day vs 2 days for 1 trailer to Glasgow

Operationally its now back on road but with trunk & local drivers

DM me for more

PS on previous note – the Malt Whisky & timber flows might also have an option to re-start operation of Dufftown-Keith as principally a freight line with an overlaid tourist traffic to sample the Whisky Trail
With drivers not held up loading & unloading, 25 mile max trips & no overnights AFH a big bonus for workers
I’d note also that the gap Dufftown-Grantown similar to Airdrie-Bathgate, & wayleave also largely preserved by cycle route!