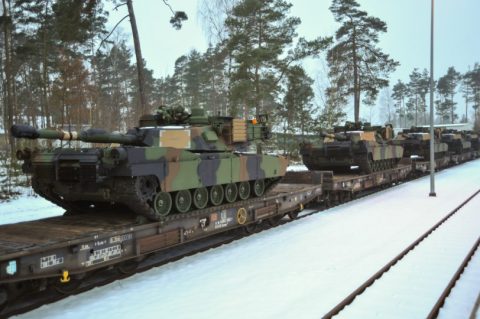 Military mobility in action: LTG loads tanks on trains for the first time

Lithuanian Railways had a first-hand experience of military rail freight a couple of days ago. US troops loaded their military equipment in the Palemonas loading facility in Vilnius for the first time. “It was a frightening yet exciting view”, said Indre Glaniauskiene, head of intermodal terminals at LTG Infra, in a LinkedIn post.

“LTG Infra is in the process of adapting civilian infrastructure to military needs”, she added. Indeed the first loading of military equipment on trains in Palemonas is part of the EU Military Mobility fund, which aims to improve infrastructure for military and civilian purposes. Around 160 million euros will go to railways. The goal of the funding is to develop infrastructure suitable for dual-use: not only for regular transport but also for moving heavy military equipment. Like the rest of the Baltic states, Lithuania is high on the list of countries that will receive funding for this purpose.

Improving infrastructure in the Baltics

The Baltic states, which all share a border with Russia, improve their infrastructure to improve military mobility. Of the three, the largest amount goes to Estonia, where the Estonian Centre for Defence Investment will receive 31 million for enhancing the connection to Estonia’s largest military base in Tapa. Part of the plans include upgrading the railway infrastructure between Palupera-Puka and Puka-Keeni stations to “increase the infrastructure’s quality, the train speed and, if necessary, support the military rail logistics”, said Kaido Zimmermann, chairman of Estonian railway manager Eesti Raudtee.

Lithuanian railway manager LTG Infra receives around 13 million to improve the loading facility in Palemonas. The Latvian transport ministry will receive approximately 5 million to integrate the military mobility requirements in the Latvian part of the Rail Baltica project, a new railway connecting the three countries.

Are you interested in learning more about Lithuania, the developments taking place there and its business potential? Do you want to get informed about the new routes linking the country with Western Europe? On 14-15 June, we organise the RailFreight On Tour-The Lithuanian Edition in Vilnius, where we will discuss the possibility of a profitable rail business in Lithuania and the broader Baltic region.