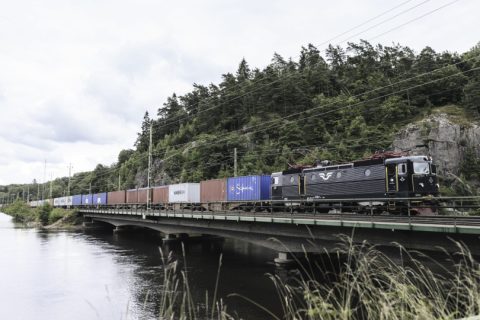 A new shuttle train connection between Umeå, in northern Sweden, and the port of Gothenburg signals a transformation for the Swedish rail freight industry. This service is the latest in a series of rail links between the two regions. Industrial investments in the Swedish north grow transport demand and will help provide international visibility and opportunities for this remote region, explained Anders Hjalmarsson, CEO of the Västerbotten Chamber of Commerce.

The first train from Umeå arrived at the port of Gothenburg on Sunday, 29 May. It is not the first train service between the major Swedish port and a destination in the country’s north. In contrast, multiple trains serve this route since the port of Gothenburg functions as a bundling transport hub allowing for quick transhipment of rail freight volumes on sea shipping lines.

In fact, the Swedish port is a significant rail freight player since its volumes rely heavily on containers transported by rail. For instance, in 2021, the port of Gothenburg handled 458,000 TEUs coming from rail freight, the highest number in its history and half of the total handled volumes. Apart from Sweden, though, the port of Gothenburg has this hub function for the whole Scandinavian region.

However, it is not the port of Gothenburg attracting most of the attention currently since, in the Swedish north, things are moving and shifting. The results of this shift will be directly visible in the rail freight market and with an international effect.

“The North of Sweden (Norrland) is the backbone of the Swedish export industry and energy supply, and it is set to grow fast. Over the next 20 years, more than SEK 1,000 billion (95 million euros) will be invested in new industries. Northvolt’s battery factory in Skellefteå and fossil-free steel production in Boden are known to most Swedes. Still, these investments are just the tip of the iceberg in the industrial boom that is underway in the north”, explained the port of Gothenburg.

Suppose all planned industrial investments in Norrland become a reality. In that case, it will be a historical series of investments in new technology and new industries that will largely contribute to green transformation. This will mean an increased need for transport”, added Hjalmarsson.

The Swedish north is already an industrial powerhouse, making it one of the country’s most used rail freight destinations. Industrial products find their way to the south by rail, while raw materials destined for the factories do the same in the opposite direction. “In the existing industry in Norrland, the need for transport is already great today, and the export markets are often found on other continents. Therefore, regular and reliable connections to the Port of Gothenburg’s direct line network are important to get the products out to customers quickly”, said the Swedish port.

However, the investment boom occurring in Norrland currently focuses on green and sustainable industries aiming to build a better future. As a result, it makes perfect sense to use a green mode to transport their products. Increased focus on climate-smart transport is important, and customers realise that the railway is reliable and efficient over time. The longer the transport distance, the more the railway comes into its own. From the port’s perspective, we can state that increased Norrland traffic also strengthens the port as a guarantor of business access to the world”, emphasised the port of Gothenburg. Indeed, cargo coming from Umeå to Gothenburg will depart directly for Asia and the USA, among other places.

Together with industries, though, rail freight logistics companies also find their way to Norrland. Anders Hjalmarsson underlined that many players in the transport sector are positioning themselves in Norrland in the face of the expected growing transport needs. An example of this is First Row Shipping & Logistics, which is also the operator of the Umeå-Gothenburg shuttle. The future looks very bright, and we expect to increase the frequency of the Umeå shuttle already after the summer. We are building the base here and now so that it is available in the future. We are in Norrland to stay”, said Nikolas Rowland, the CEO of the logistics company.

By upgraded, timely, high capacity, rail shuttles all over, the East Coast Pors of Sweden shall turn gates to Baltic, and Hinterland of PoG, the ocean port.
For sake of environment and for the needed offloading, of the congested on shore transports at Continent, the now needed, in Sweden and Europe, is an offensive goal!
Goal of membership of EU was to benefit of nearness, to and within a big “domestic” market.(Device is the sustainable, high quality infrastructure…)